Few people are as revered in sailing as the late Sir Peter Blake. Considered the world’s top sailor by many, he set around-the-world speed records. Blake also led New Zealand to successive victories in the America’s Cup. While shot and killed in Brazil in 2001, he lives on through Lion New Zealand. He helmed this maxi for the Whitbread Round the World race from 1985 to 1986. Now, the much-loved mega-maxi, which today hosts youth sailing experiences, is getting a new lease on life thanks to Yachting Developments. But, it is no easy task for her owner, a non-profit. Therefore, you can contribute to the cause.

The 80-foot (24-meter) Lion New Zealand is undergoing a much-needed restoration and refit at the shipyard. It’s more than just a job for the team, though. In fact, Ian Cook, Yachting Development’s managing director, has an emotional connection. “It is particularly special for me to have worked on the original build,” he explains. 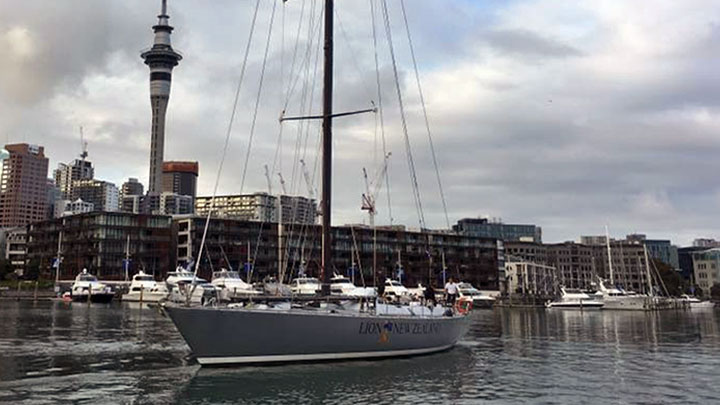 Lion New Zealand’s owner, the New Zealand Sailing Trust, knew that and respected it, too. “Yachting Developments is a natural partner for the refit on Lion New Zealand, thanks to Ian Cook’s personal history with the yacht,” says Tony Stevenson, the Trust chairman. In addition, he says, the yard’s experience with yet another Trust-owned yacht played a role. That yacht: Steinlager 2, refitted in 2014. “The workmanship, passion shown by all the team, and their willingness to work with the Trust are key reasons why we have returned to Yachting Developments once again,” he explains.

The New Zealand Sailing Trust acquired Lion New Zealand in 2008. Since then, the maxi has put more than 200,000 nautical miles under her hull. Last year alone, the Trust says, the majority of 1,200 students completed multi-day youth-sailing programs onboard. While the Ron Holland-designed maxi sails well, she is now 32 years old. Yachting Developments will install a new mast, boom, rigging, and deck winches. It will run new plumbing and electronics, too, plus replace her keel. Lion New Zealand will gain a new engine, and related components. Furthermore, the shipyard is redesigning and/or refurbishing the interior, including cabins and the galley. Overall, Lion New Zealand will emerge much as she was originally designed.

According to a Lion New Zealand crowdfunding page belonging to the Trust, the refit should cost about $775,500 (NZ$1.1 million). As of this writing, people have donated about $1,400 (NZ$2,000) to the cause. The donations page will remain active through November.