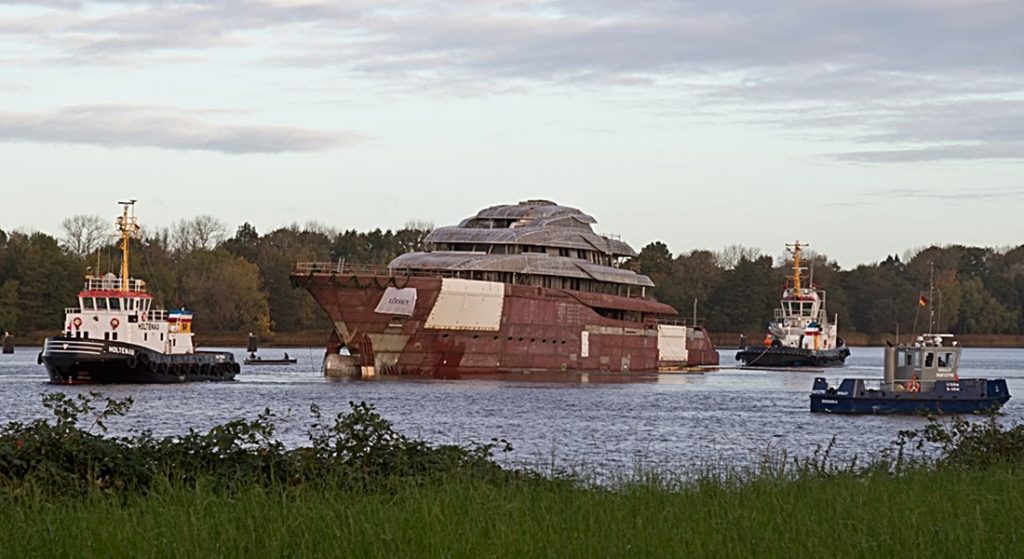 About 20 years after he first began working with his current broker, an American has seen his newest megayacht mark a significant milestone. She achieved her technical launch late last week. The code name is fitting for a 312-foot (95-meter) megayacht made for enjoying tropical climes: Project Fiji.

The launch took place at Lürssen’s shipyard in Rendsburg, Germany on Friday. A big splash heralded her appearance as she slipped down the ways, transom first (the traditional method). Tugboats then moved her over to a shed for the next stages of construction.

Initially, wide belief held the code name to be Project Maui. That name came from Moran Yacht & Ship, which announced the signing in 2015. Indeed, Rob Moran, president of Moran Yacht & Ship, revealed details at that year’s Monaco Yacht Show. Though scant, the details painted somewhat of a portrait of the yacht. He indicated that Project Maui would cater to 20 guests, for example, accommodated in 10 staterooms. He added that the yacht should also see a 2019 delivery date. (Interestingly, he also mentioned an LOA of 98 meters, or 321 feet.) Moran did not mention either a stylist or an interior designer attached to the project. However, in looking at the aluminum superstsructure in the photo above, you might see curves reminiscent of the work of Eidsgaard Design.

Lürssen has confirmed Eidsgaard Design as the stylist, further revealing the code name is actually Project Fiji. In addition, the shipyard says, the modern interior design is by Laura Sessa. The owner and guests will enjoy a beach club, as well as a spa featuring a sea terrace on the lower deck. Furthermore, Project Fiji has two quite noteworthy features aft on her upper deck. The first is a skylight that can support the weight of people walking on top of it. The second is a fireplace.

While Moran went on to mention that Project Fiji is meant for diving trips, as much as entertaining and indulging her guests. To that end, she’ll have a 39-foot-long (12-meter-long) pool. A helicopter kept at the bow will ensure swift transport or even sightseeing trips in a variety of destinations, too.

One last fact the broker shared about Project Fiji pertains to the owner. Mentioning he’d been a customer back then for 15 years, Moran called him “a great client.” He added, “We’ve built many boats for him before.”