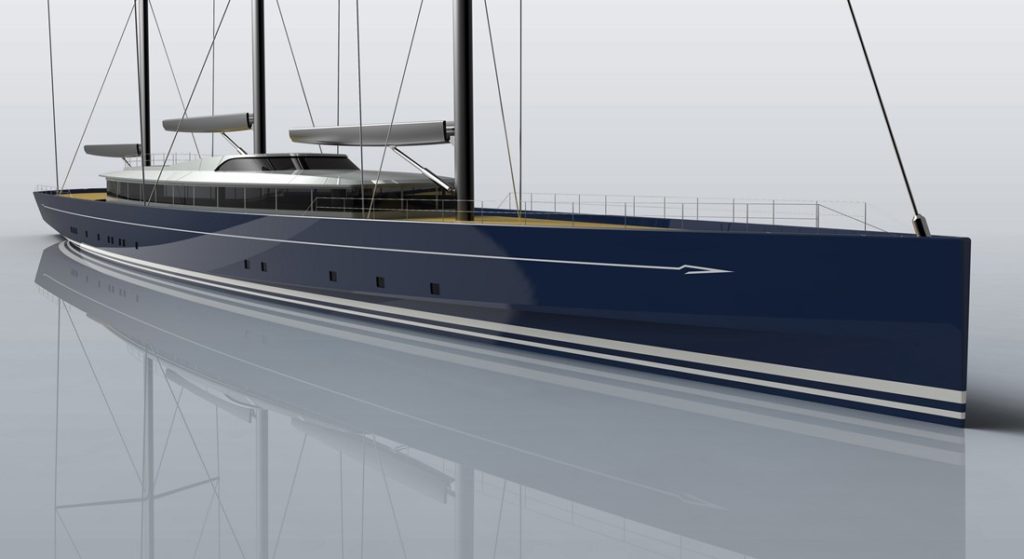 In two years’ time, Royal Huisman will lay claim to having delivered one of the 10 largest sailing superyachts in the world. For now, the Dutch shipyard is two years into the construction of that yacht, which will additionally be the world’s largest aluminum sailing yacht. The code-named Royal Huisman Project 400 just completed a major milestone, seeing her flybridge deck meet her hull.

Though less than a minute long, the video below puts the dimensions of that deck into perspective. According to Royal Huisman, it measures about 124 feet (38 meters). This, for a sailing yacht that will measure 266 feet (81 meters). For additional perspective, consider that Pumula, a Royal Huisman delivery from 2012, is a mere three feet (1 meter) smaller from bow to stern than that entire deck.

The flydeck for Royal Huisman Project 400 moved from its build hall into the separate build hall where the schooner’s hull sits. You might recall that Royal Huisman flipped her hull in March of this year. The two components, now joined, will remain in that build hall for completion.

Commissioned by an Asian owner, the yacht will be a performance schooner. Specifically, he wants to pursue global voyages, along with fast (and, of course, comfortable) cruising. With naval architecture by Dykstra Naval Architects, Royal Huisman Project 400 should see speeds close to 20 knots.

The owner intends to use the yacht for both private cruises as well as corporate entertaining. The overall ambiance suits both. Mark Whiteley Design, which further handled styling, is lending her a calm, relaxing look through soft tones and textures. For example, oak soles flow underfoot, while Alpi walnut adorns walls. (Alpi is a composite wood material blending several natural projects. It has widespread use, including aboard yachts.) Royal Huisman Project 400 is for a party of 12, though 16 can dine together in the formal dining room.

Several guests can eventually join the captain on the above-mentioned flydeck. It’s because a seating area complements the helm here. Adventurous souls can head up high in the crow’s nest, for the ultimate view (and, no doubt, Instagram selfie). It’s hydraulic.