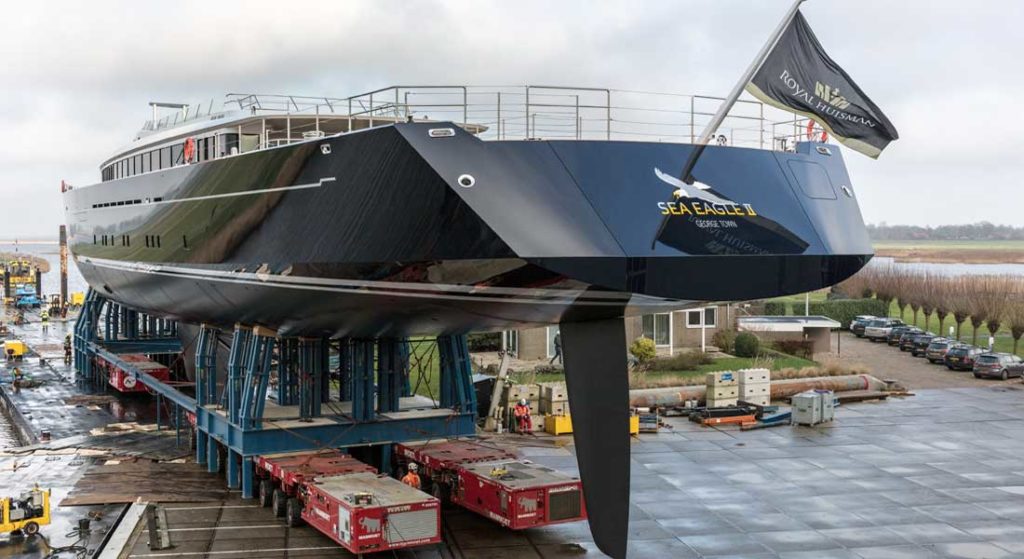 More than 150 craftspeople (pictured below) have contributed to the construction of Sea Eagle II, set to be the world’s largest all-aluminum sailing yacht, thus far. Having emerged from her build shed this week, the 266-footer (81-meter) has delivery in a few months in her sights.

Due to the dimensions of the yacht. a.k.a. Project 400, Royal Huisman has had her in build in its largest construction hall. However, it still had to add a semi-permanent extension to that hall in time for her keel laying in June 2017. The shipyard team needed to disassemble that extension, too, earlier this week in preparation for Sea Eagle II’s roll out. 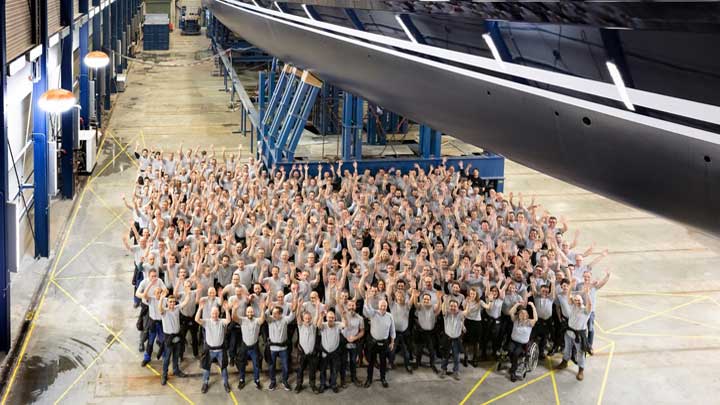 The owner, who plans to cruise in his home waters in Asia as well as pursue global voyages, requested a replacement for his 141-foot (43-meter) Royal Huisman. That yacht is Sea Eagle, which explains the now-publicly-revealed name for Project 400. Specifically, the owner requested a performance schooner. Therefore, Dykstra Naval Architects has engineered her for speeds approaching 20 knots. The sleek lines, including the plumb bow, convey she means business. Both Dykstra Naval Architects and Mark Whiteley Design contributed to those looks.

Inside, meanwhile, Mark Whiteley Design is using oak and Alpi walnut as the backdrop to a subdued, soothing ambience. A total of 12 people will have accommodations in the owner’s party, along with 13 crewmembers.

Although renderings haven’t ever been released to the public, Sea Eagle II further has a kitted-out toy garage. Underwater scooters, stand-up paddleboards, and kayaks, along with a dive tender (and of course diving gear), will stow inside. The crew tender has a dedicated stowage bay forward, the latter of which becomes a crew cockpit when the boat is in use.

Sea Eagle II, with a hydraulic crow’s nest and Panamax-height masts, is among the 10 biggest sailing superyachts in the world. She also is Royal Huisman’s largest yacht so far. Athena has held that distinction since delivery in 2004, with a hull measuring 259 feet (79 meters). Although bowsprits aren’t included in LOAs, if you add in Athena’s, her tip-to-tip length becomes 295 feet (90 meters).