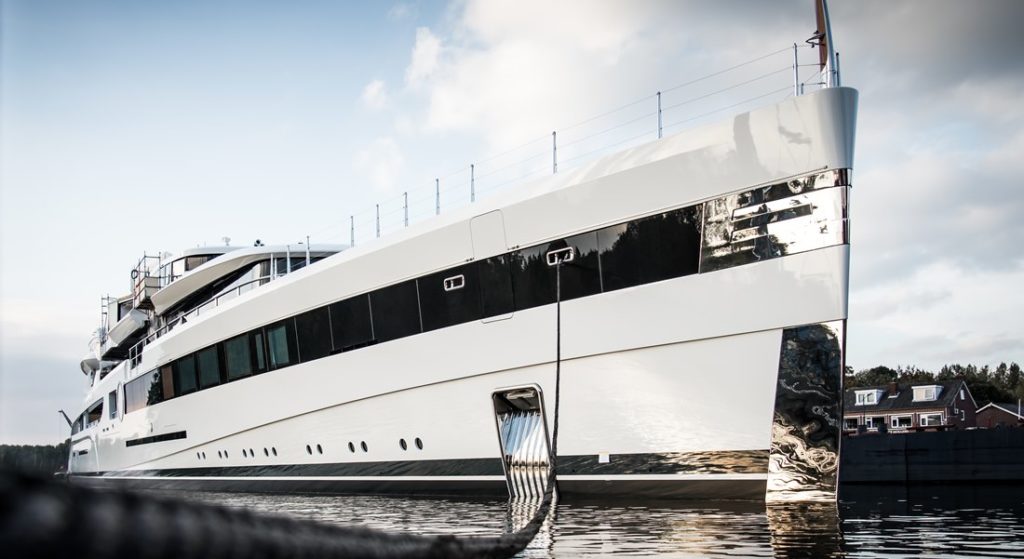 Though she won’t see delivery until springtime, Lady S slipped out into daylight on October 19. With her delighted owners present for the occasion, the megayacht marked the latest launch by Feadship.

The 305-foot (93-meter) came outside under tow at the Royal Van Lent facility in The Netherlands. The shipyard has kept the majority of details about the megayacht confidential so far. During construction, for example, it referred to her as Project 814, her hull number. Even still now, the builder calls her by her hull number. Reliable yacht watchers, however, identify her as Lady S.

Feadship has, though, divulged a handful of previously confidential specifics. For instance, it says that Lady S bears a beam of 46 feet (14.10 meters). The exterior styling, featuring a plumb bow, is by Michael Leach Design. Inside, meanwhile, Reymond Langton Design worked with the owners to create what it considers “a beautiful and contemporary jewelry box.” Having enjoyed yachting for some time, the owners naturally had specific requests. Some of the requests may surprise you, too. No one will raise an eyebrow to learn that Lady S has a certified helipad, additionally with a fueling station. But, they surely will be amazed by her two-level cinema—an IMAX cinema, no less.

Other interior features that Feaship is revealing include four VIP suites that could be considered mini cinemas, with 8K televisions. (The technology promises four times the resolution of 4K televisions, and 16 times the resolution of full HD.) When the owners and guests want to play outside, Lady S offers them plenty of choices. It’s because she has facilities for (get this) basketball, golf, soccer, and volleyball—just to name a few.

With her mast fitting taking place over the weekend, Lady S still has more physical features being added. Balconies and wing stations will make her nearly complete prior to sea trials early next year. Stay tuned.