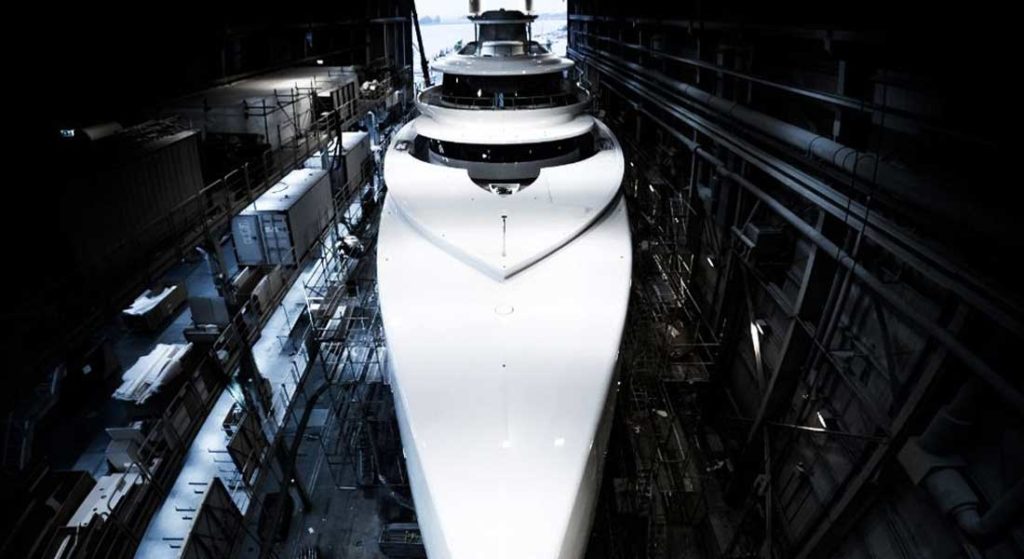 Excitement filled the air in Germany this morning, as the newest launch at Abeking & Rasmussen came out of her build shed. While her build and design teams called her Project 6505 until now, the megayacht is the newest Excellence, for an avid American yacht owner.

Abeking & Rasmussen has had a number of confidential builds on its order books in recent years. Unfortunately, this one has been no different. Regardless, early on, yacht watchers believed the megayacht would measure around 262 feet (80 meters). When the steel hull arrived from the yard’s subcontractor in Poland early last year, though, the visible details started to connect the dots to a concept that Abeking & Rasmussen did publicly discuss.

The strong, inverted bow resembled Project Intensity, which the shipyard and Winch Design, along with Y.CO, revealed in 2015. A larger yacht, at 291 feet (88.8 meters), she featured a similar technical platform to Kibo, a 268-footer (81.8-meter) from 2014. Y.CO represented the owner of Kibo during her build. It believed a pre-engineered design from the German shipyard and British design studio would attract a buyer. 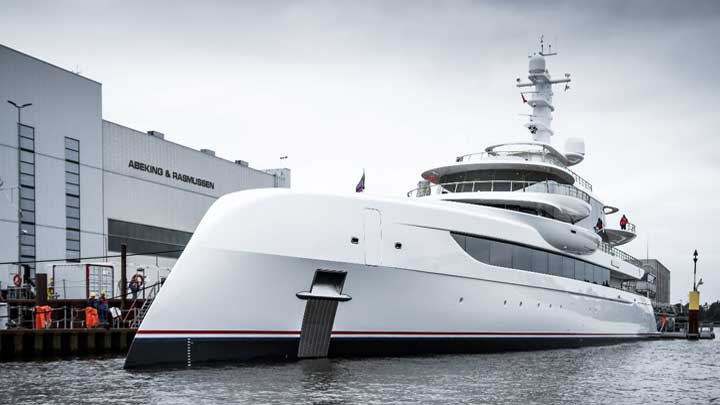 Clearly, it worked. Also clearly, the decidedly different styling caught the buyer’s eye. (Although neither the builder nor the design studio has confirmed his identity, the owner of this newest Excellence is surely famed American yachtsman Herb Chambers. All his yachts use “Excellence” in their names.) In fact, Winch Design says the buyer wanted an “extraordinary” design outside. He certainly has an extraordinary amount of mirrored glass enveloping the superstructure. It even rises up over two deck levels. Overall, the effect is as if the two decks were one large expanse. Winch Design says the glass is curved, too, with the largest panel about 20 feet (6 meters) long. The “statement glass,” as the studio calls it, particularly benefits the master suite, since it wraps 180 degrees around the room.

As for that room and others onboard, neither Abeking & Rasmussen nor Winch Design will reveal details. However, Winch Design does say she has an “industry-disrupting layout.” Stay tuned.

Given typical construction schedules, the newest Excellence should be cruising with her owner in time for some of the summer season.