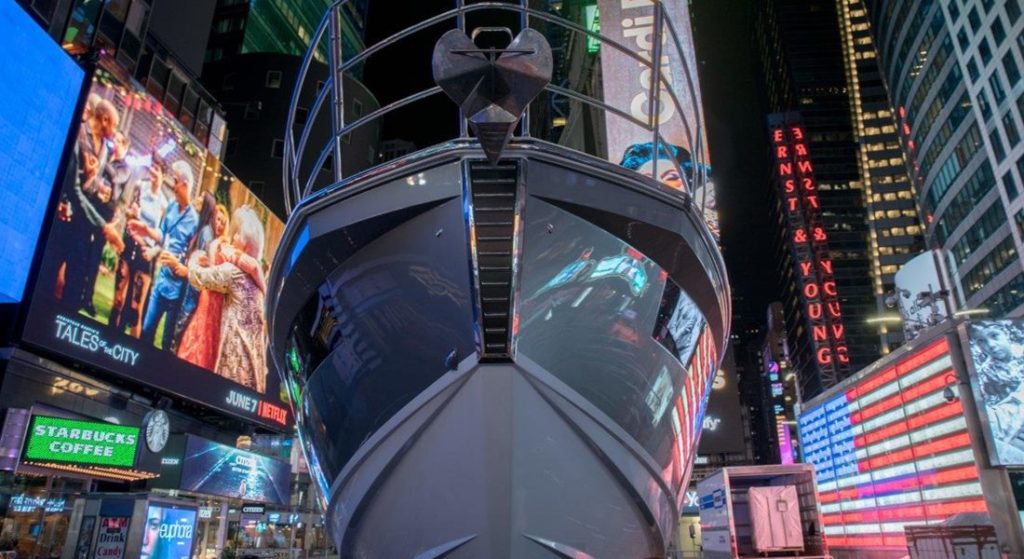 Visitors to New York City’s Times Square are accustomed to seeing unusual sights. But a yacht? Your eyes won’t deceive you if you’re there. Through June 11, Azimut takes over Times Square, in celebration of its 50th anniversary. While she’s not a superyacht, the Azimut S6, showing up all over social media, is the biggest boat that Times Square can hold.

The anniversary party in New York actually started about a month ago. On May 11, customers, dealers, and select media, including MegayachtNews.com, attended a gala dinner at the famed Rainbow Room, at the top of Rockefeller Center. In the days that followed, private cruises, panel discussions, and more occurred. In fact, Giovanna Vitelli, the group vice chair for the Azimut-Benetti Group, Azimut’s parent company, chaired a panel discussion about art and design in modern living. In addition, the company participated in the Nasdaq Impact Summit, a symposium on sustainability.

Azimut takes over Times Square for further reasons. In fact, the yacht builder is sponsoring a design competition for students. Can You See/Sea the Future encourages them to contribute ideas to improve the cruising experience. The winner will see his or her concepts become reality, in a new model that will come to market.

Additional anniversary celebrations take place around the world this year. In the meantime, the Azimut S6 is reflecting the vivid neon lights in the city. Being on concrete rather than water makes perfect sense, in the builder’s mind. Consider that Times Square is the Crossroads of the World, as its nickname holds. By sitting here, Azimut sits at the symbolic center of the contemporary world.