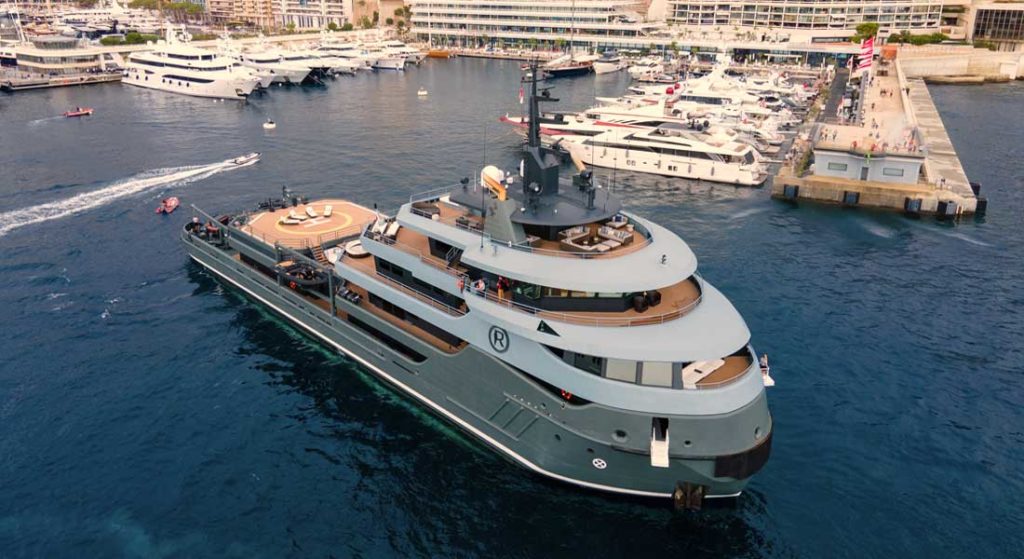 Some traditions never change, despite time marching on. Such is the case with the Monaco Yacht Club. For years now, when a special floating visitor arrives, she receives a fire brigade salute. The rugged Ragnar became the latest to experience the watery welcome this weekend. Furthermore, she kicked off a weeklong focus on sustainability in yachting.

The 223-footer (68-meter), which underwent an extreme makeover at Icon Yachts, pulled into Port Hercule yesterday. Her grey hull and tough stance complement her purpose, which includes Arctic adventure travel. In fact, she features an ice-class hull. The hull remains untouched from its original form, too. The vessel was an ice breaker named Sanaborg and saw launch for commercial service in 2012.

Simultaneously, Ragnar, bearing a 6,000-nautical-mile range, will assist scientists. Since she will venture to some of the most remote regions on our planet, the owner has her equipped with a system that gathers ocean-climate data as well as meteorological data. This system, in turn, will transmit the information via satellites.

Fittingly, then, the fire brigade salute for Ragnar heralded the start of Planetary Health Week in Monaco. This initiative is focusing on human health, climate change, and additional aspects of environmental wellbeing. Specifically, four days this week will concentrate on challenges within yachting, organized by the Monaco Yacht Club.

One such challenge, for instance, is the pandemic. Captains will discuss measures taken to mitigate spread of the virus. Additionally, they’ll discuss what further measures can help diminish the impact of infections in the future, considering health situations are ever-changing. Yet another topic is the development of a superyacht-emissions index. Currently, no standard exists across the industry, so stakeholders are striving to establish basic principles upon which to build. Finally, naval architects, propulsion executives, and others will weigh the viability of hydrogen as an alternative fuel.

All the discussions are streaming live on Facebook and via a registration-accessible Zoom link, from the Monaco Yacht Club.