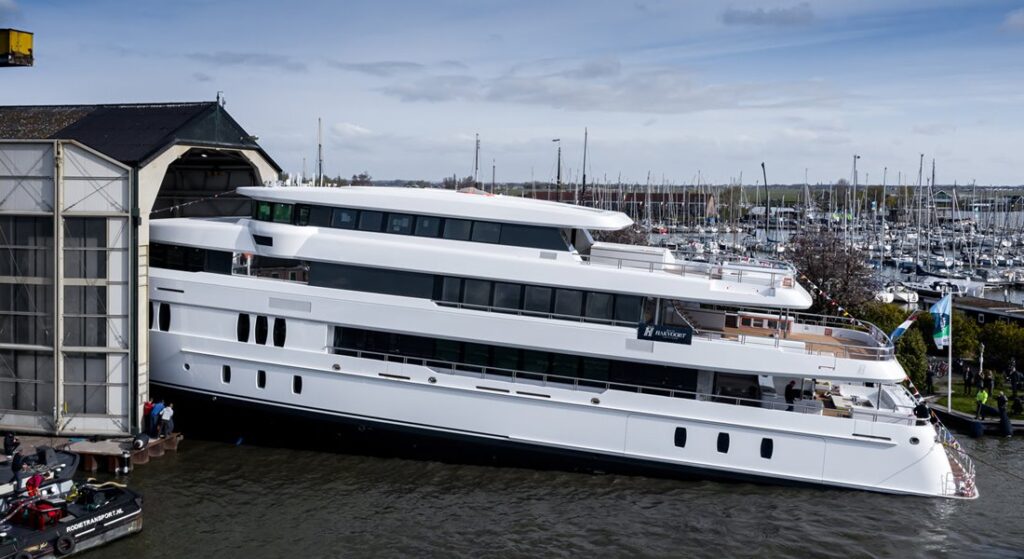 Not only is Monnickendam in The Netherlands centuries-old, but its most famous citizen, Royal Hakvoort Shipyard, launches its yacht in a time-honored tradition. YN251 celebrated the traditional sliding down the ways on April 24, for an American client intent on global cruising.

The 200-foot (61-meter) yacht has naval architecture by Diana Yacht Design along with styling and interior design by Sinot Yacht Architecture & Design. Classically appealing in profile, the megayacht accommodates an owner’s party of 12 and a crew of 19. Ten guests have five main-deck suites for waking up to wonderful views, while the owner has a private deck one level up. “Without a doubt, the most exciting feature in YN251’s design is the immense ceiling heights,” notes Paul Costerus, a partner at Sinot. He says the owner specifically requested the voluminous look and feel, too. The heights are about seven and a half feet (2.3 meters) along the main deck and 7’9” (2.4 meters) on the owner’s deck. “It’s a great achievement on a 61-meter yacht,” he adds.

A further nice touch within the owner’s area is a skylight. Additionally including an alfresco dining area and hot tub forward, the deck is an enjoyable private respite. For time with friends and family, though, YN251 affords the owner a cinema below decks and a healthy-size open galley, more like a country kitchen or show kitchen. Oak, walnut, leather, marble, and more natural materials set a warm scene throughout the megayacht, as do a variety of textures.

For playtime outside, meanwhile, YN251 carries a big tender and well-outfitted toy garage. A pool takes priority on the upper deck, while a huge—54 inches, to be exact—barbecue caters to the crowd. Come nighttime, a fire pit up on the sundeck is the perfect place to recall the day’s fun.

Though the launch was a happy occasion, it was “a bittersweet moment for the family,” too. The reflection comes from Monique and Justin de Chalain, the owner’s representatives. They noted the passing of Albert Hakvoort at age 80 earlier this year. “This is a most fitting tribute,” they continue. “The launch of the first Royal Hakvoort is a culmination of his life’s work and family legacy.” (The shipyard received the prestigious Royall designation last November.) “YN251 reflects the Hakvoort family’s unwavering quest that each boat they build will be better than the last.”

Expect the yacht to remain at the yard through the middle of June. Final completion will then take place in Amsterdam, in time for a summer maiden voyage. The owner intends to enjoy the Baltic region before heading across the Atlantic. She should see a range of 3,800 nautical miles at 12 knots under Caterpillar power. To aid in exploration, she features forward-looking sonar and a dynamic positioning system.