Home / Yachts / Top Five II Is Tops for Her Owners 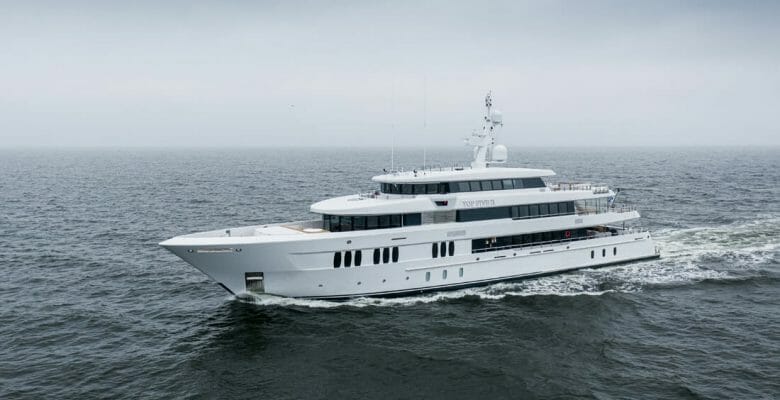 With her sights set on crossing the Atlantic Ocean for the sunny shores of Florida, Top Five II is embarking on her maiden voyage. She departed The Netherlands, where Royal Hakvoort built her, yesterday.

Also known as hull number YN251, this 200-footer (61-meter) is from an all-Dutch design and build team. Diana Yacht Design handled naval architecture, while Sinot Yacht Architecture & Design took care of the interior. Interestingly, Monique and Justin de Chalain, the owners’ representatives, say the owners spent five years reviewing shipyards. “It was the charm and character of this small, bespoke yard in the heart of the historic city of Monnickendam that drew them in,” they explain.

With accommodations for 12 in five main-deck staterooms, the megayacht has several special features. For instance, one stateroom is wheelchair-accessible. Cooking seems to be a passion, too. The galley is an open, family-oriented space, intentionally sociable yet also properly functional for the chef. An elevator connects all decks, and 7’9” (2.4-meter) headroom throughout the main deck and owners’ deck makes spaces feel voluminous. In fact, the owners requested high headroom, which also allows for larger windows for more natural light. They also requested a private alfresco dining area and hot tub forward of their suite. Elsewhere outside, Top Five II has a fire pit on the sundeck, a big barbecue on the upper deck, and a beach club for leisurely days at anchor.

Sinot Yacht Architecture & Design kept the contemporary decor understated, where “many subtle details make the interior rich and desirable,” according to Paul Costerus, the firm’s senior designer and partner. (We’ll have a photo gallery showcasing the marbles and neutral tones in several weeks’ time.) The design firm and owners also ensured the 19-person crew are well taken care of, with an ample crew mess. The captain, chief engineer, and first officer also have private cabins.

While several yachts cross the Atlantic after delivery, Top Five II will take on further oceans, and further challenges. Her hull is reinforced for icy conditions, for instance, plus she has a forward-facing sonar to pick up potential obstructions. Of course, she further meets the IMO Tier III emissions regulations. Expect her to see a range of 4,200 nautical miles at 12 knots under Caterpillar power, too.

Top Five II holds a further designation: She is the first delivery from the shipyard after it received its Royal designation last year. “The yacht is a culmination of their 101-year shipbuilding history as well as serving as the springboard for excellence for the next 100 years,” the de Chalains declare.