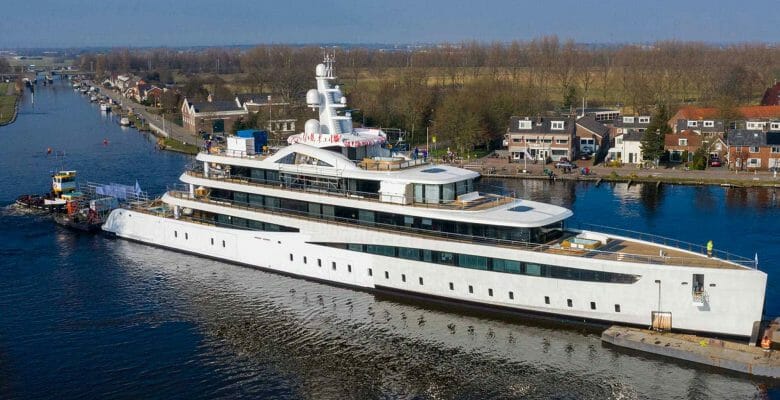 A superyacht serving as a science lab. A yacht-loving couple who acquire a Bahamian resort to restore it to its former glory. And a 35-year-old classic undergoing a major refit for modern cruising. These are just some of the most-read megayacht features we published in 2021. For specifics, read on.

Unfortunately, not all news is good news. In February, Go had a computer malfunction while in St. Maarten, garnering a lot of attention on social media and in the press. If there’s a silver lining, though, her captain deliberately tried to minimize damage, by aiming her at the dock that she hit. In fact, Capt. Simon Johnson says he was quite worried about taking out the Simpson Bay Bridge when he suddenly lost steering. It’s rare that captains can comment in an accident’s aftermath. Johnson did, however, countering rumor mongering. “I used to live here and have many friendships over the years,” he explains. “I know this yacht so well, yet I had 13 seconds to make a decision before hitting the bridge. The decision I made was one I would make again if faced with the same circumstances.” Thankfully, no one on shore or on the yacht sustained injuries.

Amara as Good as New

Since we publish numerous features about refits, the popularity of this one took us by surprise. In a little over seven months, it’s been read nearly 6,000 times. Perhaps it’s because Amara is a 35-year-old Feadship, an unusual age. Additionally, the owners of the 188-footer (57.3-meter) spent a season cruising aboard before commissioning the refit. Amara gained a new helideck capable of handling twin-engine craft, for instance. The yacht has an entirely new interior, too, including the crew’s quarters. Notably, though, she still has her original engines—refurbished, of course.

The striking Project 817 (at top), whose real name is rumored to be Viva, belongs to a repeat client of Feadship. While her looks are attention-getting, her size is the story. LOA: 308 feet (94 meters), a giant leap from the owner’s prior 203-footer (62-meter). But, that dramatic difference wasn’t a big deal to the owner. In fact, the shipyard says that the owner has chartered “virtually every Feadship available in the global fleet over recent years.”

Stories about owners are always among our most-read megayacht features. The identity of Oleg Burlakov, the owner of Black Pearl, emerged upon his death over the summer. The yacht’s official Instagram account shared the news, and his name, paying tribute to his vision for a more environmentally friendly yacht.

Cruisers and especially angling enthusiasts are quite familiar with Walker’s Cay in The Bahamas. Two consecutive devastating hurricanes forced it to close in 2005. Fortunately, along came Carl Allen, a multiple-superyacht owner with his wife Gigi. Allen’s passion for restoring Waker’s Cay was loud and clear in our interview with him. So, too, is their shared passion for keeping it and its surrounding reef as pristine as possible.

Commonly, superyacht owners have offices onboard. Jonathan Rothberg, a scientist renowned for his DNA sequencing work, has more than an office aboard Gene Chaser. This support yacht has two full-fledged labs. Rothberg specifically had Gene Chaser refitted to include them, so that he and other scientists and researchers could conduct genetic research to solve a host of global problems. “We are going to go after genes to combat global warming and clean up the oceans and the air,” he asserts. He adds, “In our planet’s very genes lie the answers to our biggest challenges and the key to our salvation.” Gene Chaser is an extension of the lab aboard Rothberg’s more traditional-looking yacht, Gene Machine, aboard which he developed an at-home Covid-19 test.