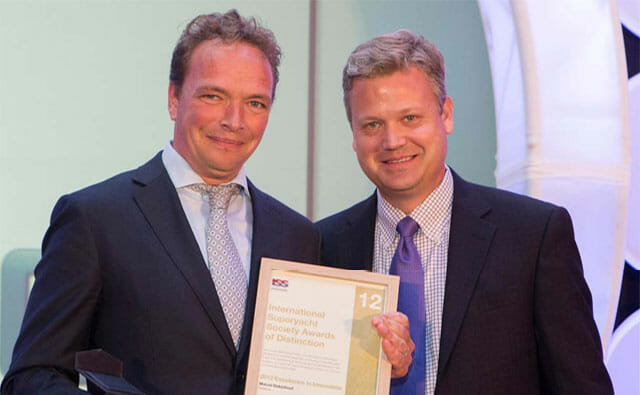 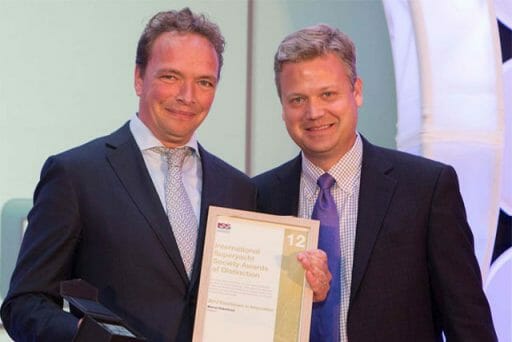 Each year when the International Superyacht Society (ISS) hands out its famed Design Awards, it also bestows a handful of Awards of Distinction. These include the Excellence in Innovation Award, given to a business or person demonstrating improvements and originality in their activities within the previous year. Nominations come from the entire yachting industry, and nominees similarly come from every aspect of the industry. Last month the ISS presented Marcel Onkenhout (left in photo), CEO of Oceanco, with the Excellence in Innovation Award.

Among the reasons why Onkenhout was singled out: the success that Oceanco has had in securing super-size superyacht contracts in light of its relative youth. The Dutch builder is “just” 25 years old. While that may sound old enough, there are other Dutch as well as Italian, German, and American shipyards with histories dating back a century. And, many of those same yacht builders are targeting the same 230-foot-plus (70-meter-plus) size range. While Oceanco can certainly build a 197-foot (60-meter) megayacht, under Onkenhout’s leadership, it has made a concerted effort to attract clients interested in the larger—and far more complex—projects.

At the ISS Design Awards gala, Onkenhout called attention to all employees of Oceanco, as well as its subcontractors—“co-makers,” as the Dutch often prefer referring to them. He also said the idea of innovation at the company involved everything from construction to after-sales service.