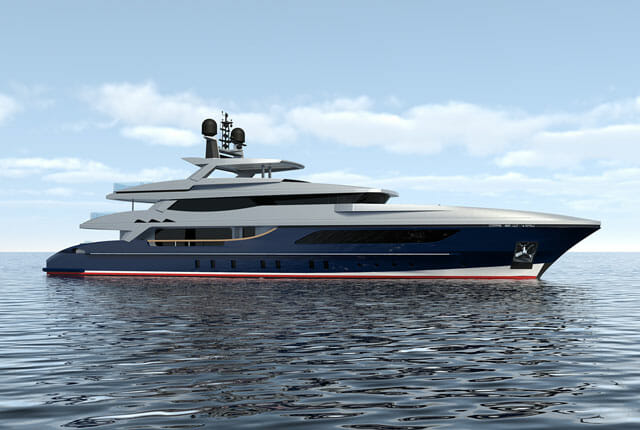 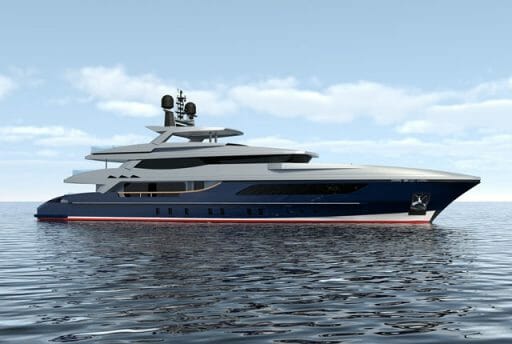 At nearly 151 feet LOA, this Baglietto 46-meter is under construction at the Italian shipyard. In fact, construction started some months ago. Baglietto only just released details about her now.

The Baglietto 46-meter was ordered by a client from Eastern Europe. The project is part of the builder’s Displacement Line series. She bears design by Francesco Paszkowski, the same naval architect behind the Baglietto Fast Line series. Paszkowski has graced the steel-hulled megayacht with both soft and sharp lines. Note particularly the rounded stern, the bow flare, and the angularity of the forward upper structures.

Full specs aren’t available yet for the displacement Baglietto 46-meter. However, the same-size Fast Line megayacht has a beam of 30’2” (9.2 meters). So far we do know that the new megayacht will have twin Caterpillar engines. This should permit a 12-knot cruise and 17-knot top end. The cruise speed should allow a 4,500-nautical-mile range. The Baglietto 46-meter will be classed to ABS and fall beneath the 500-gross-ton threshold, too.

Some of the megayacht’s key features are a beach club exceeding 269 square feet (25 square meters). A separate tender garage holds an 18-foot (5.5-meter) dinghy, a PWC, and a rescue tender. The Baglietto 46-meter has a traditional accommodations arrangement. A saloon, dining area, and galley are all on the main deck. There’s a main-deck master, too, with four guest staterooms below decks. Two of the guest staterooms have twin beds. There are all twin beds in the four crew cabins as well. And, as you’d expect, the captain’s cabin is abaft the wheelhouse.

Delivery of this Baglietto 46-meter is set for early next year. That will be a few months after a sistership premieres at the fall boat shows. A same-size Fast Line yacht will follow later next year. So, too, will a 177-footer (54-meter).