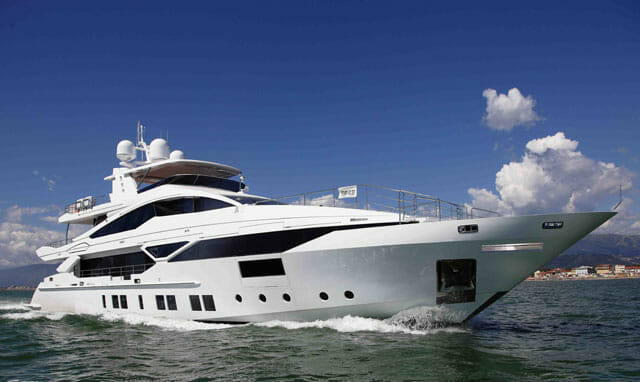 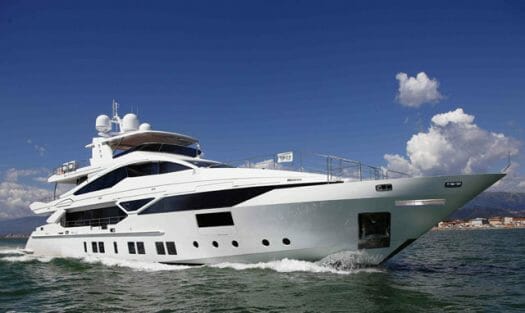 If it’s boat-show season, it’s also megayacht-debut season. A number of megayachts—some recently delivered, others new to the American market—will be making their debuts at the Fort Lauderdale International Boat Show this month. Affectionately referred to as FLIBS within the yachting industry, the show is the world’s largest in-water event.

Among the megayachts premiering are:

* Arcadia 85: Arcadia Yachts, based in Italy, was founded in 2008. It began exhibiting at FLIBS within the past few years, but never had a model on display. The Arcadia 85 is therefore making her stateside debut.

* Benetti Veloce 140 (pictured above): This is the first fast-displacement megayacht from Benetti. The builder calls the hull design a D2P hull, meaning Displacement to Planing. It promises 30-percent better efficiency than conventional planing hulls. Top speed should be about 20 knots. The owner, who christened the yacht Cheers 46, is a repeat Benetti client and had Redman Whiteley Dixon design a highly customized interior.

* Christensen Shipyards’ D’Natalin IV: the newest Custom Series 164 megayacht from Christensen Shipyards has been turning heads all along the West Coast this summer. She has a contemporary-meets-classic interior design by Carol Williamson & Associates. The owners, having had three megayachts previously, were heavily involved in the specifications creation and the overall design and construction.

* Hargrave Custom Yachts’ Adventure Us II and 76 Flush Deck Widebody: Adventure Us II is a 94 Skylounge Motoryacht for a repeat client. There’s a great story behind her: A grandmother who loves the water, and who’s a repeat Hargrave customer, commissioned the megayacht for her grown children and her grandchildren to cruise with her. The 76 (below) is a new version of a prior model. The latter differs in having a full-beam interior and other spaces specifically arranged for a couple who plan to live several months onboard at a time.

* Italian Sea Group’s Entourage: This 154-footer (47-meter) is an Admiral Maxima model. The Italian Sea Group, as a reminder, was formerly known as Admiral Tecnomar. Entourage is classed to RINA Green Plus and has full-height sliding-glass doors on both sides of the saloon. Entourage premiered at the Monaco Yacht Show and is the first megayacht that the Italian Sea Group will ever have at FLIBS, part of a new initiative to market to Americans and Latin Americans.

* Paragon 100 SkyMaster: christened Kaytoo, the 100 SkyMaster gets her model name from the configuration of her lofty superstructure. She has a good-size cockpit, too, ideal for barbecuing and relaxing or even fishing. The yacht was designed to tow a tender, too—specifically, a center console.

* Sanlorenzo SD112: Christened O, this is the first SD model from Sanlorenzo. She’s actually the first of six for this new series, whose name stands for semi-displacement. Highlights include fold-down balconies off the saloon and woods like teak, walnut, and Tanganyika that are used both inside and outside. 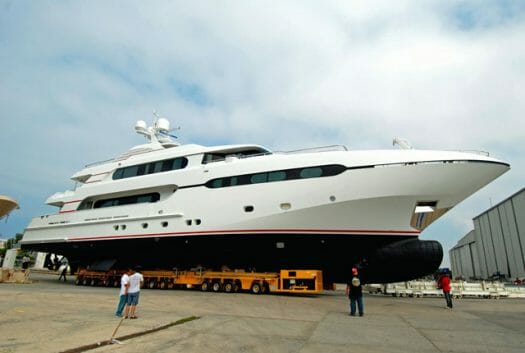 * Sunrise Yachts’ Atomic. This 147’6” (45-meter) motoryacht (above) was just delivered to her owner last month. Atomic was known as Project Sunset while under construction. The megayacht was started on spec as a sistership to Africa, and the buyer stepped in prior to the interior being completed.

Some new megayacht projects will also be announced at the show:

* Outer Reef Yachts, known for its long-range cruisers, is initiating a new megayacht series designed by Ward Setzer Yacht Architects. It’s the Explorer Series, consisting of a 108 and 115 so far.

* Cheoy Lee will have drawings and information on hand for its two newest models, the Alpha 111 and Explorer 150. Each was penned by Overing Yacht Design.