You are here: Home / Yachts / Motoryachts / SeaXplorer 75 to Explore the Oceans in 2020 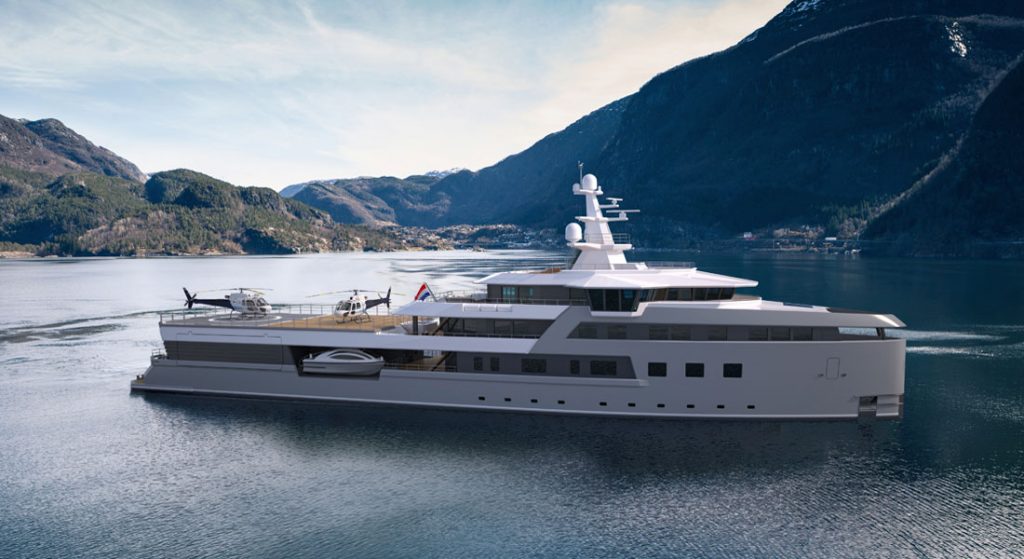 Say “skiing” to yachting enthusiasts, and they may assume you mean waterskiing. In the case of the owner of the SeaXplorer 75 depicted here, it actually means skiing. More accurately, it means heli-skiing. The nearly 247-foot (75.15-meter) globetrotter will support both cold- and warm-weather adventures.

Damen SeaXplorer yachts are a joint creation of the commercial shipbuilder Damen and its yachting division Amels. Damen performs the yacht construction, while Amels oversees sales and marketing. The projects are for yachting clients seeking more ruggedly engineered craft, capable of safely navigating polar regions and remaining autonomous in tropical and cool climes equally. In fact, every project complies with the IMO Polar Code.

This SeaXplorer 75 is the second one sold so far. (The first, a SeaXplorer 65, is in build for delivery in 2019.) She’ll accommodate an owner’s party of 12, along with 25 crewmembers and other staff (such as guides or pilots). On the luxury side, the SeaXplorer 75 will have seven guest suites between the upper and main decks. She’ll also have a hot tub on the sundeck, an observation lounge tucked into her bow, a spa-like area, a hangar for a personal sub, and a dive center. In addition, a snow room below decks will cater to all when heli-skiing is on the agenda. Guests can change here, pick out their skis or snowboards, and listen to the helicopter pilot explain procedures.

To facilitate these ski trips, the owner wants the SeaXplorer 75 to carry two helicopters. It’s for safety’s sake. Heli-skiing often involves remote, and even poorly mapped, mountain ranges. (In fact, Rose Damen, Damen’s commercial director, says that the SeaXplorer 75 owner plans to ski in Kamchatka, a peninsula in far eastern Russia that’s almost entirely wilderness.) Weather can be unpredictable, too. The second helicopter therefore acts as a backup in case of poor visibility, sudden turbulence, or other situations.

Both helicopters will, of course, land on certified heli platforms on deck. The SeaXplorer 75 additionally will have a below-deck hangar to stow them. Naturally, she’ll also have fueling stations for them.

The helicopters will further be helpful when the owner and guests travel to areas like Papua New Guinea and the Galapagos. Here, too, the areas are remote, so the helicopters will make up for the lack of other ways to get around. But, for the most part, the yacht’s submarine and sportfishing gear will see use.

The adventures are set to start upon delivery in late 2020.