You are here: Home / Photo Galleries / The Spectacle of the Superyacht Spectre: Photo Gallery 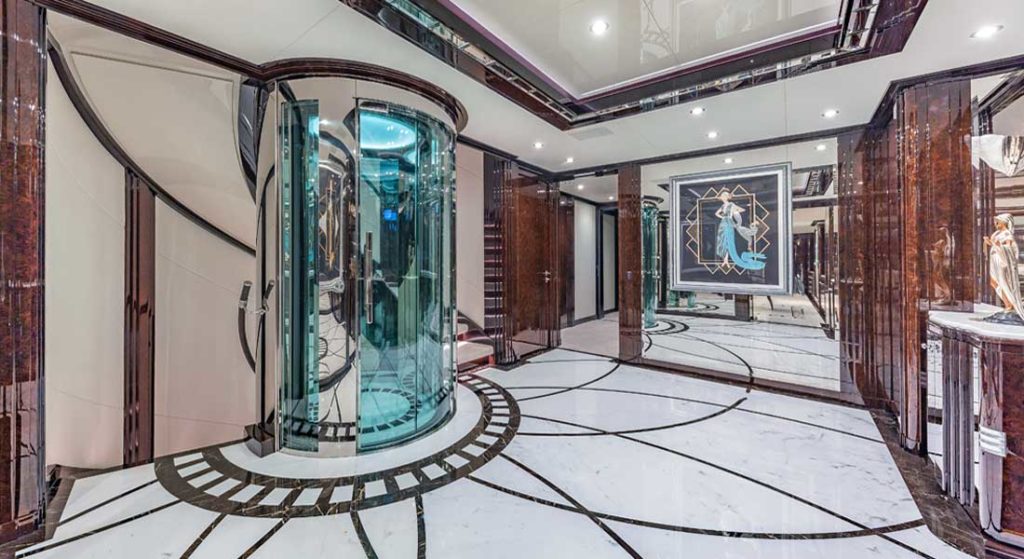 Though she changed hands late this winter, the then-recently delivered Spectre continues to attract attention. Given multiple facts about her, it is no surprise. The 1,000-ton-displacement yacht, for example, required 750,000 man hours to construct. In addition, measuring 227’4″ (69.3 meters), the yacht represents the third Benetti for her original high-profile owners, John and Jeanette Staluppi. Equally notable, the superyacht Spectre is quite the spectacle, both technologically advanced and visually dazzling.

Representing the ninth collaboration between the Staluppis and Mulder Design, Spectre takes technical prowess to a high level. In fact, she boasts strong speed with extra efficiency. Fitted with what Mulder Design calls a High Speed Cruising Hull, she is reportedly capable of a 21-knot maximum speed. This is about 30 percent quicker than similarly powered displacement yachts. Despite what you might assume from such performance, however, she burns less fuel than the norm at long-range speed. She does so because she has a pair of 12VMTU 4000 Series engines, comparatively modest for her LOA. Furthermore, Spectre employs Total Ride Control from Naiad, which reduces roll and pitch. It particularly “will greatly improve comfort when cruising at 20 knots,” according to Frank Mulder, the design studio founder. 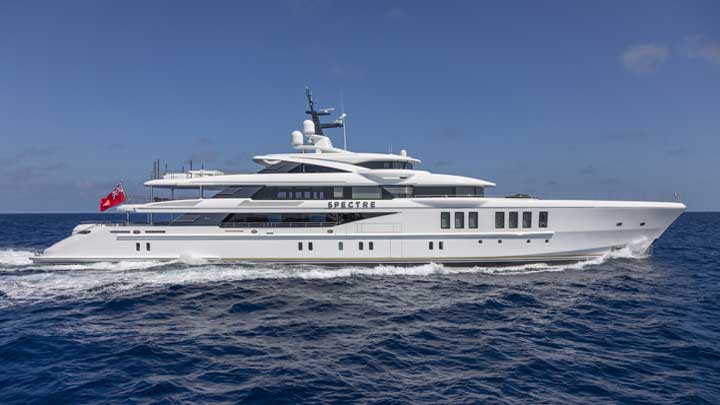 In terms of interior design, though, the true spectacle of the superyacht Spectre comes through. The decor, in which the Staluppis were heavily involved, painstakingly recreates the Art Nouveau period of the late 1800s. (This design style, begun in France and spread internationally, was a precursor to Art Deco.) The shipyard’s own Benetti Style Department ensured that rich details appear from the main saloon straight through to the six staterooms. In fact, these details start at the very entry to the yacht, off the main aft deck. Two club chairs, paired atop an inlaid stone sole, act as a welcoming mini-saloon, before guests enter the main saloon itself. Furthermore, striking glass and wood designs provide a dramatic backdrop here. Complementing etched glass cabinet fronts, small glass blocks, one lined up against the other, outline the cabinetry at ceiling height. The effect is much like traditional dentil molding.

From the upper-deck master suite, with a glass headboard, to the five guest staterooms, high-gloss woods, highly polished marbles, and glistening crystal abounds. Inlays, once again in wood, stone, and glass, recreate the period decor. Even the shapes of the windows from deck to deck echo the Art Nouveau concept. Ultimately, the Staluppis wished to capture the essence of the finest boutiques in Paris during the period.

Additionally attracting attention for modern indulgences like a hamam, hair salon, and pools, Spectre strikes all the senses. Click any of the images below to launch the photo gallery. 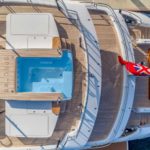 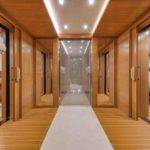 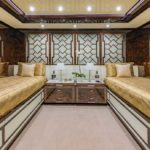 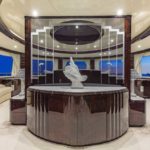 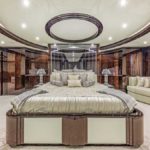 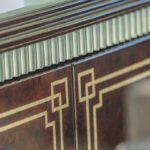 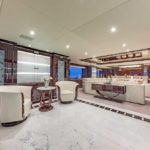 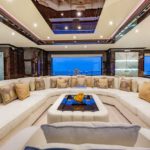 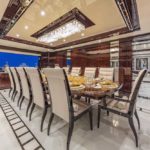