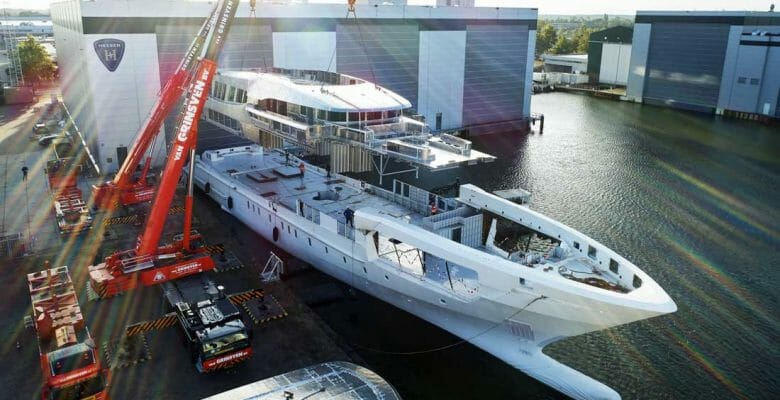 One hundred ninety-seven feet (60 meters) of steel and aluminum came together over the last weekend in September in The Netherlands. One year after her keel laying, Heesen’s Project Falcon saw the joining of her hull and superstructure.

Also known as YN 19360, Heesen’s Project Falcon is projected to be the yard’s largest ever megayacht in terms of volume. Specifically, she should come in at about 1,600 gross tons. That figure is higher than the gross tonnage of even Galactica Super Nova, the largest Heesen by length (230 feet, or 70 meters). Her tonnage: 1,130.

The owners of this new megayacht turned to Omega Architects for the styling. Multiple angles characterize the superstructure, for instance. Fittingly for her code name, the design studio and the shipyard both compare some of the shapes to that of a bird’s wing. In addition, the owners and the studio collaborated closely for special lighting, to draw attention to architectural elements. Still, though, Heesen’s Project Falcon is unmistakably a Heesen family member.

Last year, when the keel laying took place, the interior designer’s identity remained publicly unknown. Now, however, Heesen has revealed that the owners are working with Sinot Exclusive Yacht Design. Expect to see intricate details—even though we may have to wait until the launch, or perhaps delivery, to see glimpses and learn what woods, stones, and other luxury materials appear aboard.

But, if the general arrangement remains the same as we learned last year, then we may be in for a treat. This is because staterooms are in unexpected places. For one example, a twin stateroom and a VIP stateroom occupy the forward portion of the main deck. Plus, they connect to one another. A further VIP suite is amidships on the upper deck. The owners decided to situate their suite fully aft up here, too. Finally, eight remaining guests get four twin staterooms below decks.

Heesen’s Project Falcon is on schedule for delivery in 2021.