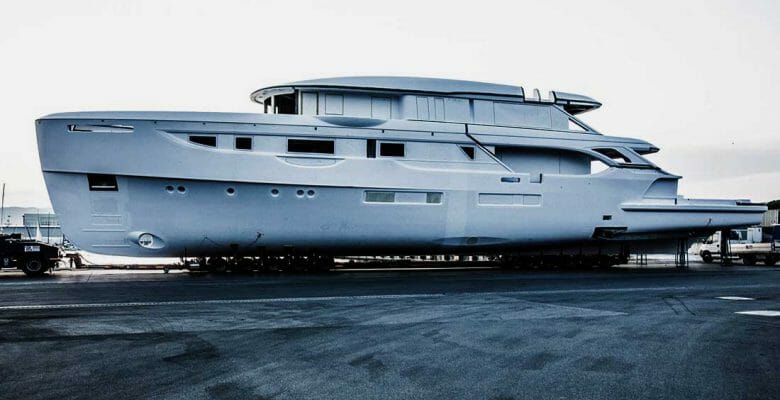 Special guests of Benetti will be among the first to see hull number one of the semi-custom Oasis 40M series. Rebeca debuts at a private event in Portofino, Italy tomorrow, where the builder is showcasing yet another yacht, the Magellano 25 Metri.

Featuring a sporty exterior style by RWD, the Oasis 40M series concentrates life onboard around the beach-like aft deck. It’s not a traditional beach club, purposely. In fact, the design and build team felt too many beach clubs don’t really connect the owners and guests to the ocean environment. Therefore, the 134-foot (40.8-meter) megayacht incorporates an open-air sunning and lounging playground. The pool and surrounding deck space become all the more inviting and open due to fold-down platforms to each side. Additionally, you can imagine the overall effect this has on the 27’9” (8.5-meter) beam.

The owners of Rebeca, Tim and Rebeca Ciasulli, liked this more casual yet still sophisticated setup. To say they have a passion for the water is an understatement, considering Tim is a four-time offshore powerboat champion. In seeking their new yacht, the Ciasullis wanted a simple process. “We didn’t want another job,” Tim Ciasulli says, “so it had to be quick, easy, and fun.” Since Benetti had started the project on spec, it was indeed quick when they bought her last summer.

A meeting of the minds with the interior designer for the series, Bonetti/Kozurski Architecture, was quick as well. Tim Ciasulli explains that within just two meetings, he and his wife plus the build and design teams finalized all the equipment and interior decor details. Rebeca has accommodations for 10 people, with open, flowing areas. The tones and textures inside match ones used outside, for continuity and fluidity.

Look for more about this new megayacht and what convinced the Ciasullis to buy her in a Megayacht News Onboard feature later this fall.