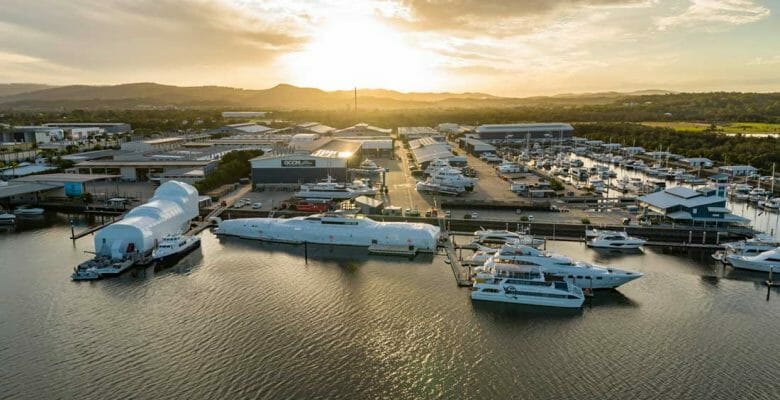 Gold Coast City Marina & Shipyard is the largest refit and repair yard in the Southern Hemisphere. It’s one thing to be the biggest, though, and another to receive top-notch reviews. ACREW, which holds professional-development workshops for captains and crew, invited crewmembers to vote for the best superyacht businesses. Gold Coast City Marina & Shipyard received the most votes as Australasia’s best superyacht marina.

While ACREW has held annual awards for crew, this year it added business awards in various categories. For example, besides marinas, it asked its 15,000 captains and crew to pick the best provisioning companies, yacht agents, and even best health-insurance companies. Specifically for marinas, captains and crew weighed the standard of service, along with facilities tailored to them. Additionally, they considered customer service—toward guests as well as themselves—plus accessibility to major cities and transportation centers. Environmental commitment was a big factor, too.

Trenton Gay, CEO of Gold Coast City Marina & Shipyard, says the team was “humbled and proud” of the award.  “We share it with all of our onsite tenants and partners,” he adds. “It is truly a team effort,” thanks to more than 90 businesses on the property. The management team claims no other Southern Pacific yard has this variety. This, in turn, helps explain why megayachts from around the work seek its services. Furthermore, it helps explain why Gold Coast City Marina & Shipyard became the first Asia-Pacific facility to receive 5 Gold Anchor accreditation. Similar to consumer ratings for hotels and the like, the Gold Anchor program employs real user input. But, it also subjects the marinas to independent audits, plus ongoing customer surveys.

“When we launched the concept of GCCM over 20 years ago, our aim was to design the best marina and shipyard facility, which would be the base for Australia’s leading marine trades offering the very best in customer service and quality,” Gay says. “We believe we have achieved this, and through ongoing investment, improvements, and expansion of the site, we continue to meet the needs of the global superyacht fleet.”