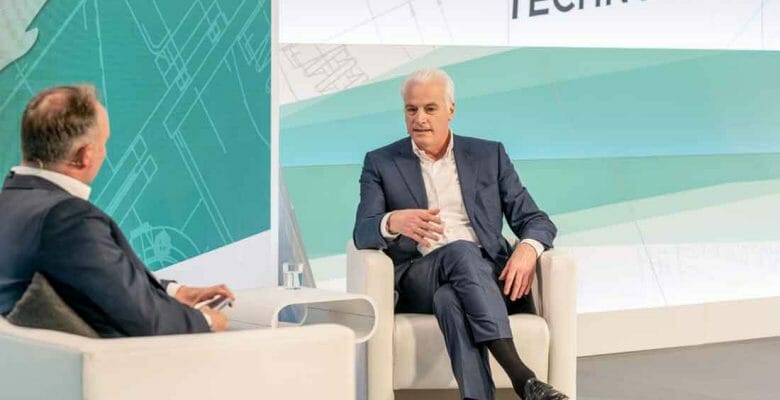 If all testing goes according to plan this summer, fuel cell technology will provide the propulsion for a client of Lürssen. The shipyard is constructing not just its first-ever fuel cell powered superyacht, but also the first private vessel globally to incorporate such a system.

With all the talk about sustainability and propulsion, it was a matter of time for this technology to enter yachting. Briefly, a fuel cell uses hydrogen or another “fuel” to produce electricity. While the first fuel cell dates back to the 1890s, the technology has come into practice in more modern times. Fuel cells adapt to large and small needs alike, too, such as power plants, passenger vehicles, and even laptops. Furthermore, they can operate at higher efficiencies than traditional combustion engines. Additionally, fuel cells have low sound and vibrations, plus lower emissions than combustion engines. For example, with hydrogen fuel, the only emissions are water.

For the fuel cell powered superyacht, Lürssen is collaborating with a client who Peter Lürssen (above), the yard’s CEO, describes as a technology lover. The owner is excited by the practical possibilities, too. Specifically, he’ll be able to spend 15 nights at anchor emission-free. Plus, the yacht will be able to cover 1,000 miles at slow speed emission-free. During a livestream video interview earlier this month, Peter Lürssen added that the yard just received permission from the client to divulge these details. Delivery should be in 2025. 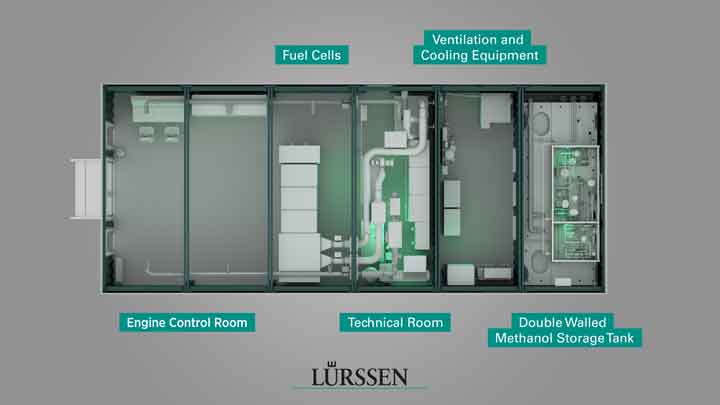 Details about the yacht herself are not available, though. Regardless, Lürssen has revealed a number of facts making this fuel cell powered superyacht possible. Firstly, since 2005, the yard has been participating in research projects involving the technology on ships. “We don’t just want to use the latest technology on our yachts,” Peter Lürssen points out. “We want to advance the status quo.” Four years after those initial research projects, the builder began partnering in a German government-sponsored research project, Pa-X-ell. Fellow partners include the classification society DNV. Altogether, their goal is developing and testing a hybrid energy system with PEM fuel cells, the most common type (currently in cars, for example). These fuel cells would then go on to power yachts and other seagoing passenger vessels.

Lürssen has set up an Innovation Laboratory to simulate this system (above), with the assistance of Freudenberg, a global maritime fuel cell leader. Anticipated for use this summer, it will operate under real-life ambient conditions, with all auxiliary systems, too. Hydrogen will serve as the fuel, continuously reformed from methanol. The two companies chose methanol versus elemental hydrogen for a few reasons. It’s widely available globally, for instance, and simpler to handle than elemental hydrogen. It’s also climate neutral when renewable sources like the atmosphere’s CO2 lead to its production. Moreover, its stowage tanks can sit in structural tanks low in a yacht’s double bottom. Hydrogen, by contrast, requires pressurization or liquefying, which necessitates larger tanks and related structures.

“We consider this demonstration to be the final preparations to bring fuel cells onboard a yacht successfully,” asserts Justus Reinke, managing director of the yard. “It will definitely bring us a step closer to a CO2-emission-free Lürssen yacht.”

Peter Lürssen adds, “My grandfather built the world’s first motorboat in 1886. My dream is to be the first to build a yacht without a combustion engine.”