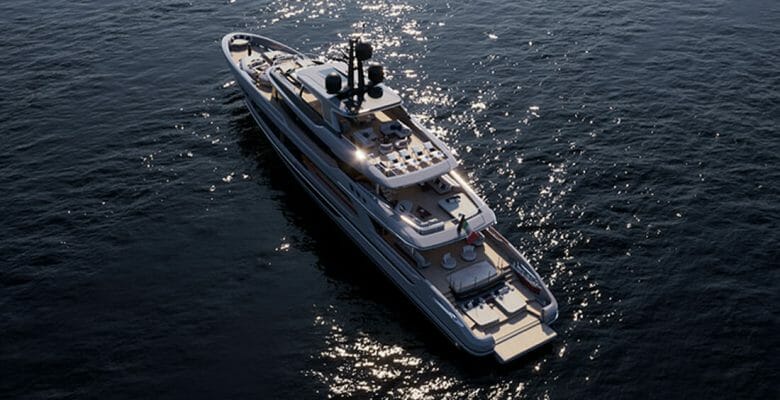 UPDATE, OCTOBER 18, 2021: Baglietto has sold hull number three of the T52 series, which features exteriors by Francesco Paszkowski Design. This particular yacht further has interiors by Studio Vafiadis. “Three orders secured plus two hulls built on speculation even before the first unit has even been completed are figures bearing witness to how this new displacement line is effectively responding to current market needs,” says Baglietto’s CCO Fabio Ermetto. Similar to her sisterships, the third T52 has a three-level, open beach club, a signature feature for the series. The pool’s floor also can raise flush with the deck when the pool isn’t in use. Plus, the sky lounge has opening floor-to-ceiling glass on three sides. 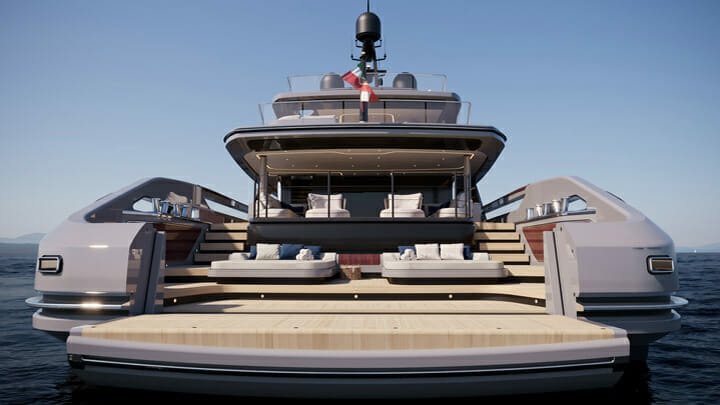 A spec project in Baglietto’s line of displacement megayachts beneath the 500-gross-ton mark has caught the attention of a buyer. As a result, the buyer-turned-owner will take delivery of this Baglietto T52 series in 2023.

With the “T” signifying “tradition,” the T Series overall has a blend of classic and modern yachting lines. Styling is by Francesco Paszkowski Design, with the extra-large sundeck among the highlights. It spans nearly 79 feet (24 meters) in length, making it one of the largest for a megayacht of 171 feet (52 meters). Additionally, instead of a traditional enclosed beach club, the Baglietto T52 has an open, tiered transom. The proximity of its big sunpads to the main aft deck’s social area makes it more of a multi-level, entirely alfresco beach club.

Further taking advantage of alfresco space, this Baglietto T52 has an upper-deck lounge with opening glass on three sides. The glass panels slide flush with one another, too, eliminating obstructions from the terrific views. Below decks, meanwhile, the megayacht has a spa, with a sauna and a gym that has an opening side hatch. Furthermore, the floor of the pool on the aft main deck rises flush with the deck when it’s not in use, to allow for more usable area. 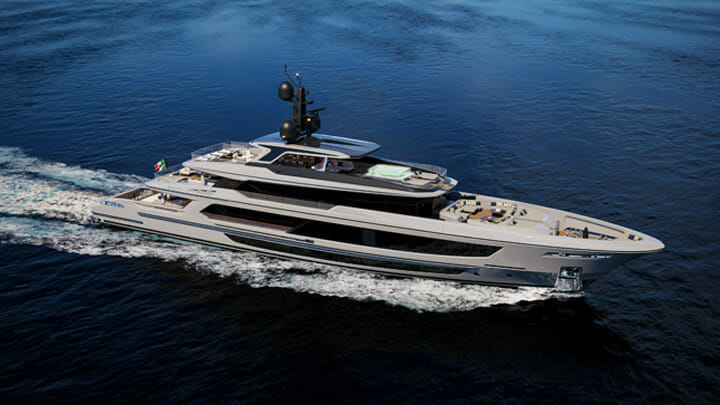 The design for these interior areas as well as the rest of the yacht comes from Paszkowski’s studio, too, in conjunction with Margherita Casprini. Baglietto is not yet releasing information on the ambience or the materials the owner has requested.

While this Baglietto T52 bears several similarities to another T52 in build, hull 10238, she will have traditional diesel engines. The twin Caterpillars should allow for a top end of 16 knots. Hull 10238, in contrast, has diesel-electric propulsion, expected to see a 17-knot top speed with just her diesels operating.

This sale marks the fifth of the year for the shipyard. Recently, it sold two DOM 133 projects. The sale also takes the total of in-build megayachts to 11.