Home / Yachts / Olokun, by Tankoa Yachts, Is One With the Ocean: Photo Gallery 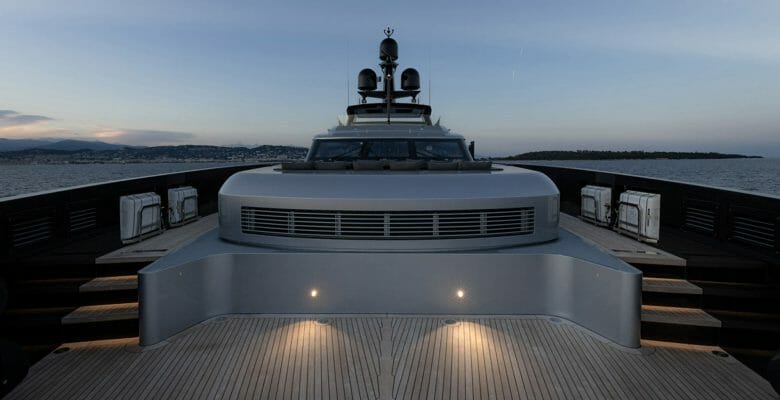 In Yoruba, a primarily West African religion, Olokun is the ruler of all the bodies of water on earth and the deepest depths of the ocean. The megayacht Olokun will rule the waves for her owner and guests, especially with an ambience creating “a complete nautical experience.”

So says Dio Rodriguez, founder of the Casa Dio design studio, which collaborated with the owner for the interior design. The yacht is the third launch in Tankoa Yachts’ S501 series, started on spec and sold ahead of launch in 2020. To differentiate her from the prior series deliveries, and especially to cater to this owner, Casa Dio did a few things in particular.

Firstly, formal dining doesn’t take place on the main deck. The owner wanted that deck exclusively devoted to relaxing, conversations, and similar activities. He also wanted Olokun to have a larger than typical main saloon. The dining room is instead on the upper deck. In fact, the upper deck has two dedicated dining tables (above), one inside and one outside, both of which can accommodate the full party.

Also on the main deck, the owner has a lovely private suite with two fold-down balconies. While the balconies carry over from the other Tankoa deliveries, the way the owner’s office converts doesn’t. Olokun already has four guest staterooms below decks, as you probably expect. The office can become an extra cabin to accommodate an even larger crowd.

Perhaps most notable, though, the owner wanted soothing spaces as close as possible to the water. Casa Dio and Tankoa Yachts knew this meant a typical beach club wouldn’t do. “We transformed the beach club space to create a hammam (just visible above) and also converted the tender garage into a lounge,” Dio explains. Essentially, the side-loading garage is an extension of the beach club. It’s because the owner prefers using a bigger chase boat, a 49-footer (15-meter), that doesn’t stow here. (That said, however, the garage still has a telescopic crane.) “By doing this we were able to not just meet but also exceed the owner’s expectations,” Dio says.

As you tour Olokun, with three shades of brushed oak, note that Tankoa has a hull in build on spec. Two further hulls are under contract for launch next year.