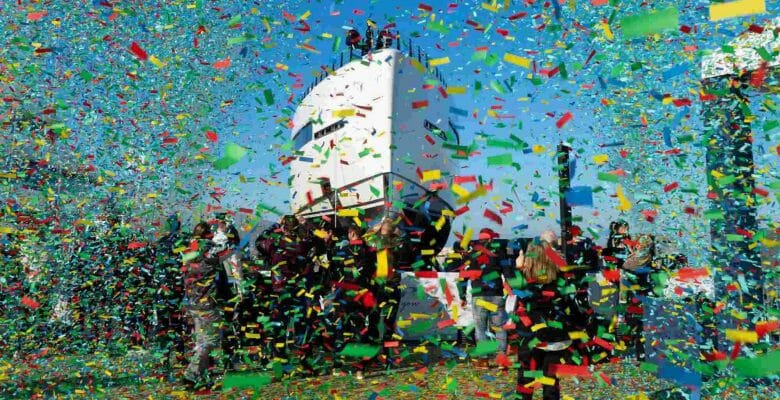 Just as Duran Duran sang in the 1980s, Rio by CRN knows she’s something special. While the band’s title character danced on the sand, this one will dance across oceans.

The owners of Rio celebrated the launch just last weekend, during a private ceremony. The project had remained under pretty tight wraps since the shipyard announced the build several years ago. Fascinatingly, in what may reflect the continued strong interest in new builds, the megayacht changed hands just days before her official launch.

Regardless, great fanfare greeted the 203-footer (62-meter) as she slipped into the water outside of CRN’s construction facilities in Ancona, Italy. Those along the dock had plenty of opportunity to snap photos of her curvy stance, from the drawing boards of Omega Architects. CRN and Ferretti Group managers spoke about the experience building the project. Then, the ceremonial bottle of champagne broke across her bow.

Requesting Rio by CRN versus another shipyard affords the owners entry into a family of sorts that dates back nearly 60 years. In 1963, Sanzio Nicolini, an Italian entrepreneur, opened a yacht shipyard in Ancona, Italy. He named it Costruzioni e Riparazioni Navali—literally, Shipbuilding and Repairs. CRN is simply a shortened version of the original name.

Since those days, the builder has focused on entirely custom construction. Rio follows suit, especially inside. Firstly, few would expect to find a full-beam VIP suite forward on the main deck. Secondly, even fewer would expect to find a second VIP onboard. It, too, is full beam, below decks. The owners have the upper deck of this four-level superyacht to themselves. However, guests will be welcome to join them on occasion. A nice lounge with large glass shows off the surrounding anchorages.

Arguably, the most anticipated feature onboard is the main-deck saloon. CRN says it’s larger and more voluminous than most.

Again, as Duran Duran sang, when Rio shines, she really shows you all she can.