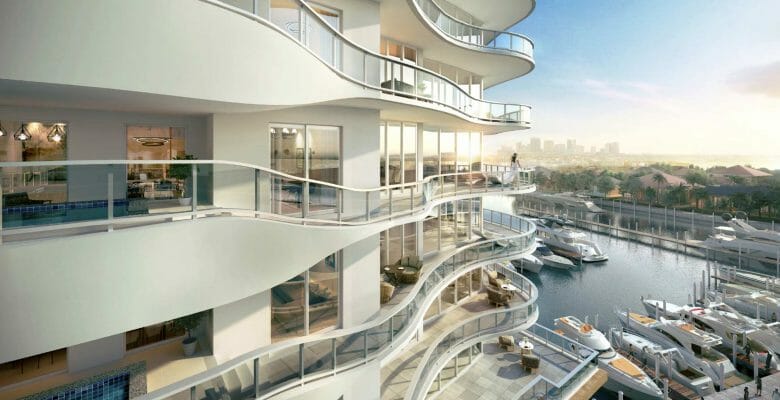 In the 1960s, the Pier Sixty-Six hotel opened in Fort Lauderdale. Its spire earned iconic status among superyacht owners and crew who docked at the adjacent marina, as well as area residents and visitors. The in-development Residences at Pier Sixty-Six, with sales starting in October, is striving for similarly iconic status. Several of its luxury condo units will overlook the berths, plus be walking distance to superyacht exhibits during the annual Fort Lauderdale International Boat Show.

The real-estate development firm Tavistock Development Company acquired Pier Sixty-Six in December 2016. Eight months later, it acquired the former Sails Marina land and marina space across the street. Since then, Tavistock has been planning major redevelopment. In fact, groundbreaking on the Residences at Pier Sixty-Six began in 2021. The first units will be ready in 2024. Specifically, 62 condos are in two 11-story buildings, from 2,600 to 2,700 square feet (about 241 to 251 square meters). Yet another 31 units are in two four-story villa structures. They range from 1,600 to 3,800 square feet (about 149 to 353 square meters). All will benefit from a newly designed Marina Promenade with shops, restaurants, and offices, plus dedicated concierge services and VIP events. Exclusive owner privileges further include a special resident restaurant, private pool cabanas, and wellness facilities. Each unit in the 11-story condo buildings will have balcony plunge pools, too.

Remaining unchanged, of course, is the marina. It’s still open, too, throughout the entire construction phase. A total of 164 slips cater to yachts and megayachts up to 400 feet (122 meters) LOA. The marina’s deep water of 30 feet (9.1 meters) means even sailing superyachts can dock here. Furthermore, no bridge restrictions impede tall superstructures or masts. The site is also the first marina upon entering Port Everglades and a few minutes’ drive from the international airport. Notably, owners of the condos will have preferred privileges at the marina.

Because the Residences at Pier Sixty-Six doesn’t impact the marina, it further doesn’t impact the annual yacht show. Therefore, expect to see brokerage displays here, as usual, along with the Superyacht Village exhibits this coming October.