You are here: Home / Yachts / Motoryachts / Constance Emerges After 18-Month Refit at Pendennis 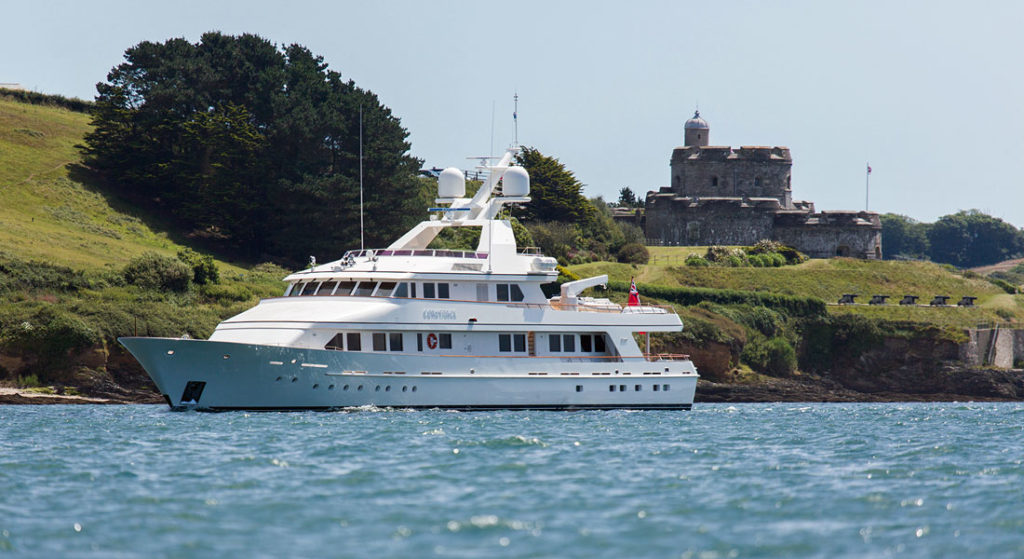 What happens when a 30-year-old megayacht becomes uninsurable? Is the scrap heap her destiny? Visionary owners and the refit team at Pendennis disagree. They believed it possible to make one particular megayacht not just insurable, but also compliant with regulations she wasn’t built to meet. This is the story of Constance.

Constance started life as Paminusch, measuring 151’9” (46.3 meters) in 1986. Feadship built her for a prince who had a hand in her styling, surely making the short cruises he pursued all the more enjoyable. Pamunisch passed through several hands, and changed names several times, over the years. Subsequent nameboards read Monteath, Montigne, and Jana. Jana was the name she carried upon arrival in Pendennis’ waters in December 2014. But there was a startling difference: She arrived on the deck of a cargo ship, not compliant with insurance standards.

A survey prior to arrival revealed a lack of structural integrity. It further revealed that some of her original systems, while functional, didn’t meet current emissions and/or efficiency standards. Most important, the owners wanted the megayacht to meet the MCA’s “unrestricted service” operations requirements. In brief, this means they wanted to take Constance well offshore, something her original owner never intended. 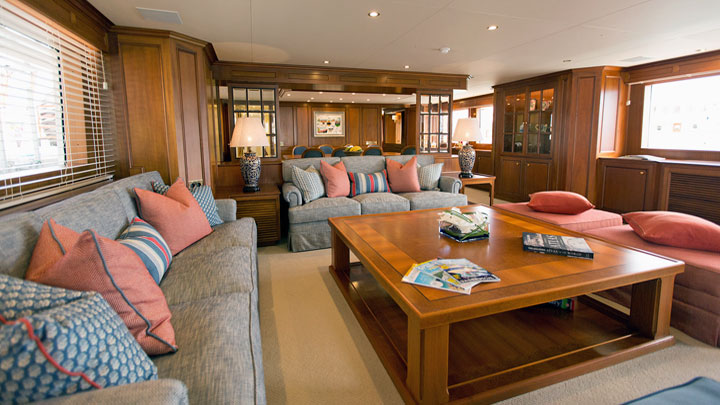 It took three months to prepare Constance before she could venture inside Pendennis’ refit shed. Once there, the engineering aspects of the refit took priority. To meet MCA’s and other modern regulations, Pendennis created additional watertight bulkheads. Insulation upgrades, tank rebuilds, and engine-room and wheelhouse equipment replacements took place, too. In fact, every component of the engine room and wheelhouse came out.

Of course, the owners of Constance also wanted the interior to suit their lifestyle. She has accommodations for 10 to 12, along with 10 crewmembers. Thankfully, the original wood paneling was salvageable. Pendennis’ craftspeople restored it off the yacht and reinstalled it. To see rooms like the one above, you’d think it was entirely new. The crew’s areas received a significant amount of attention, too. The galley contains all new equipment, as does the laundry. The crew cabins further have entirely new furnishings.

New teak decks now grace Constance, as does, of course, a new paint job. Two new davits sit outside as well. Even with such significant overhauls, she retains her original character.

An 18-month restoration challenges even the most experienced owners. Consider, then, that Constance belongs to first-time motoryacht owners. They went into the project with eyes wide open. “When we took over the boat and understood the implications of the survey results, the refit initially seemed a very daunting project,” they say. They are thrilled with Constance, and “now we are very much looking forward to enjoying time onboard.”