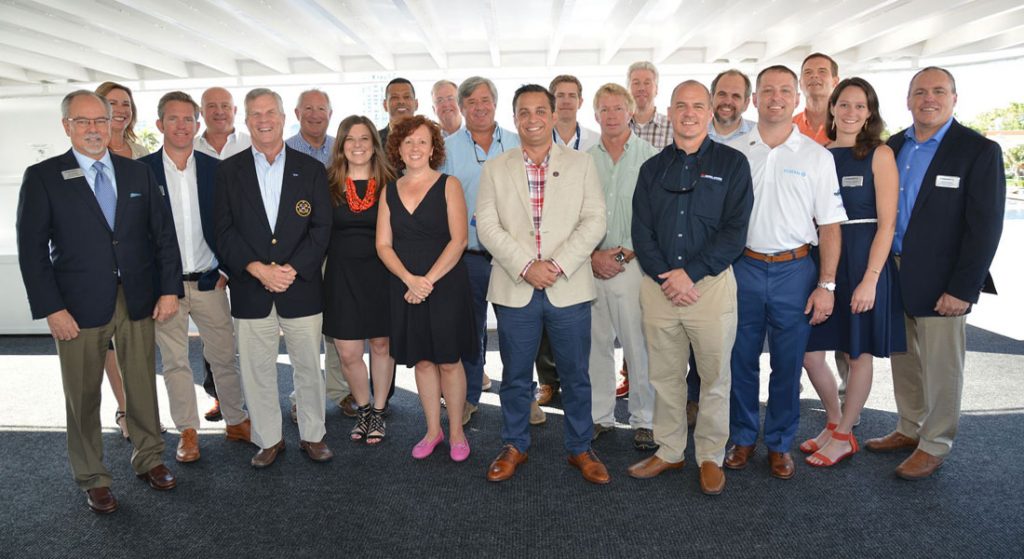 MegayachtNews.com’s founder and editor, Diane M. Byrne, is the newly elected vice chair of the U.S. Superyacht Association, a.k.a. the USSA. As such, she remains a member of the 2017-2018 Board of Directors.

The USSA is a non-profit trade organization that promotes and supports the American superyacht industry. It does so through advocacy, marketing, and education. Byrne (wearing the pink shoes) joined the USSA in 2006, shortly after the organization established, in fact. She therefore became one of its first members, outside of its founders. Byrne then became more involved in 2014, signing on as co-chair of the USSA’s annual Superyacht Summit. The Superyacht Summit is a symposium educating members on pressing industry issues, plus assisting them in growing their businesses. She has been chair or co-chair of the Summit every year since then. In addition, in 2015, Byrne was elected to the USSA Board of Directors, successfully running for re-election in 2016.

“From the moment I first learned of the USSA, weeks after its founding, I was impressed by the strong focus on supporting American businesses and challenging antiquated laws that detrimentally impacted yachts and crew,” Byrne says. “Getting changes made in Washington, D.C. is an arduous task, but the inroads made by USSA since then are extraordinary. Today, far more politicians, on both sides of the aisle, understand and respect the important economic impacts that superyachts make on American soil. I look forward to continuing getting that message across, as well as helping our members improve their businesses.”

As vice chair, Byrne will work closely with Kate Pearson of Safe Harbor Marinas, the newly elected USSA chair, plus the rest of the board. The board includes:

The USSA has Regional Board Members as part of the Board. The include: