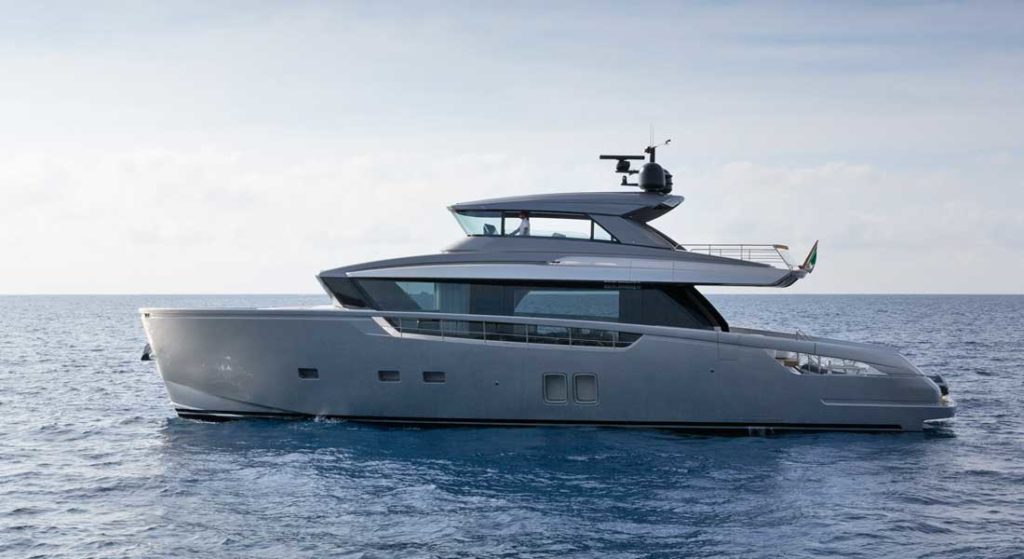 While Sanlorenzo is only just publicly announcing its latest SX series model, already eight customers have commissioned the first several hulls. Meet the Sanlorenzo SX76, bringing the advantages of the crossover series’ larger sister to the entry-level megayacht customer.

Sanlorenzo initiated the series with the SX88, which brings new thinking to the motoryacht market. While many shipyards talk about how full-height glass enhances cruisers’ connection to the sea, the SX series literally opens up the boats. So, just like the SX88, the Sanlorenzo SX76 has a deeper alfresco area aft, terraced as well. In fact, you get 194 square feet (18 square meters) when the tender and PWC that stow on the swim platform go in the water. (On a related note, their launching crane conceals outboard to port.) Set up sunlounges and umbrellas, and you can spend the afternoon out here. 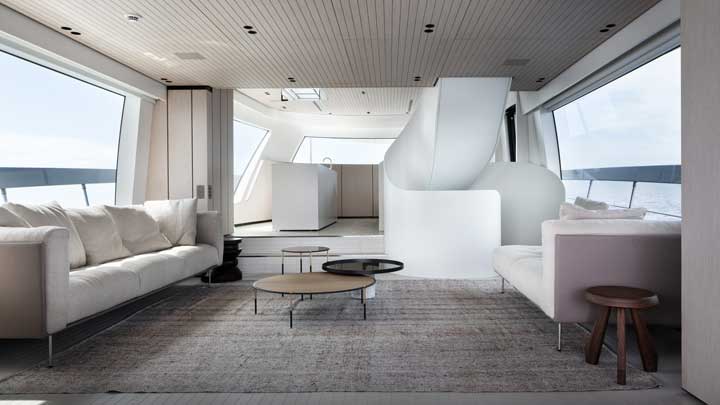 Further similar to her larger sister, the Sanlorenzo SX76 puts the sole helm station on the flying bridge. This makes the interior one large lounging and dining space. Since Sanlorenzo always likes to give customers options, the layout is flexible. Designer Piero Lissoni has one arrangement with an open floor plan including the galley, up a few steps to port (above). In that version, the dining area sits opposite the galley. In another arrangement, the galley is enclosed. Whatever you choose, you benefit from a nearly 22-foot (6.6-meter) beam.

Further regardless of your decision, the 76’6” (23.35-meter) megayacht has a sculptural element inside, too. Lissoni turned the stairway connecting the flying bridge to the lower deck as a continuous prominent curve. In combination with your choice of loose furnishings, the SX76 has decidedly modern flair.

Whether you enjoy watching the world go by through the large windows or from the bow seating/dining areas, you’ll enjoy a good turn of speed. Sanlorenzo expects the twin 800-hp Volvo Penta IPS 1050 engines to permit a maximum speed of 22 knots. Cruising should come at 20 knots, while most economical cruising should be at 12 knots. (No range is yet specified.) Plenty of shallow-water destinations are at your disposal, given the five-foot (1.56-meter) draft at full load.

Featuring four staterooms, the Sanlorenzo SX76 has naval architecture by Lou Codega, renowned for sportfishing yachts and trawlers, as well as the SX88. Styling is by Zuccon International Project.