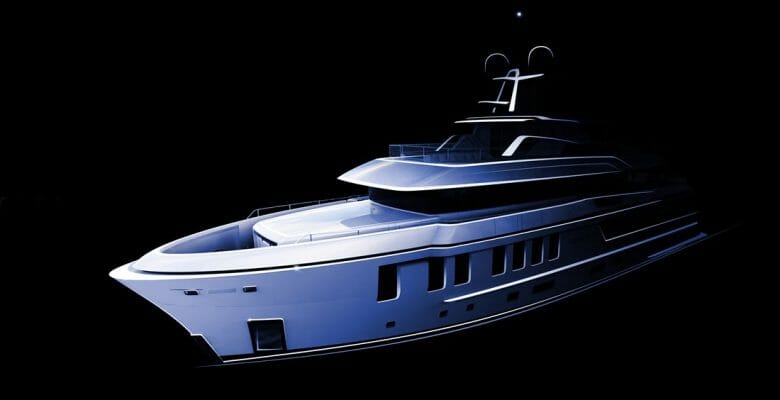 The “43” in the project name Deep Blue 43 signifies her LOA in meters. Why, then, does Vasco Buonpensiere, co-founder as well as sales and marketing director of Cantiere delle Marche, say about this 141-footer, “we are about to build the smallest 80-meter yacht ever built”? Well, to be fair, the comment is an inside joke among the management team. Deep Blue 43 represents the most exhaustive set of specs the shipyard has ever created with an owner—which took nearly a year to develop, too. The goal, for both sides, was to eliminate any change orders other than those for unforeseen necessities.

Deep Blue 43, as you might imagine, is for an owner who has abundant experience on the water. To that point, this owner has owned fully custom yachts from well-known shipyards in The Netherlands and Germany. In addition, the owner is a repeat Cantiere delle Marche customer. However, his previous megayacht was a Darwin 102, a series build. This time around, he’s going fully custom.

In keeping with its focus on explorer yachts, Cantiere delle Marche is constructing a globetrotter. While there’s no word on where the owner will go, he does want commodious crew’s quarters. This is to ensure they’re as comfortable as guests on long trips to far-flung locales. On a related note, his Darwin 102 might provide a hint as to those locales, and the activities within them. Not only did she cruise all over the Atlantic Ocean, but she also tackled the Med and the Pacific. Furthermore, she visited plentiful remote diving spots worldwide. No wonder, then, that Deep Blue 43 is a full-displacement design, developed by Hydro Tec.

With an impressive volume of 440 gross tons, the megayacht bears styling by Horacio Bozzo Design. Horacio Bozzo himself blended the take-on-the-world lines of explorers with softer lines indicative of more traditional pleasure yachts. Inside Deep Blue 43, the yet-to-be-revealed interior designer is arranging six staterooms, with four on the main deck. The other two sit below decks. Guests should appreciate the observation-lounge-like upper saloon, since it has panoramic views. For pure fun, Deep Blue 43 features a pool on her aft deck, as well as a sundeck.

The megayacht is already in build, with delivery set for 2021.