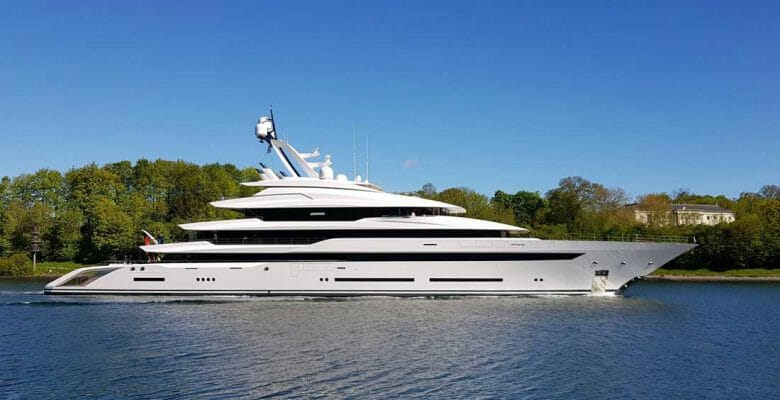 Bright blue skies greeted the code-named Project Hawaii yesterday as she departed the shores of Rendsburg, Germany. Her destination: the Baltic Sea. Sea trials are getting started for this eagerly awaited yacht, which will be among the largest deliveries of 2020 by the end of the year.

Project Hawaii, at a length of 285 feet (87 meters), first made her way into the water at Lürssen in late January. Due to confidentiality agreements, just a few facts were available at the time, including styling by Bannenberg & Rowell. Now that she’s better visible, some of her features are better discernible, too. For instance, note her dramatic bow flare and an aft-raked, open-centered navigation arch. Further striking, open-centered sections aft frame her swim platform. Based on most megayacht customer requests these days, a large hatch just forward of this framing could denote fold-down beach club access.

Regardless, aerial photos from her launch revealed a helipad at the bow, with a stylized “A” emblem. (As Project Hawaii headed off on sea trials, her transom nameboard was, as expected, covered.) On her uppermost deck, meanwhile, a large hot tub took a prominent position fully forward. That same deck may suit indoor-outdoor relaxation, since two skylights were also noticeable in the covered structure amidships.