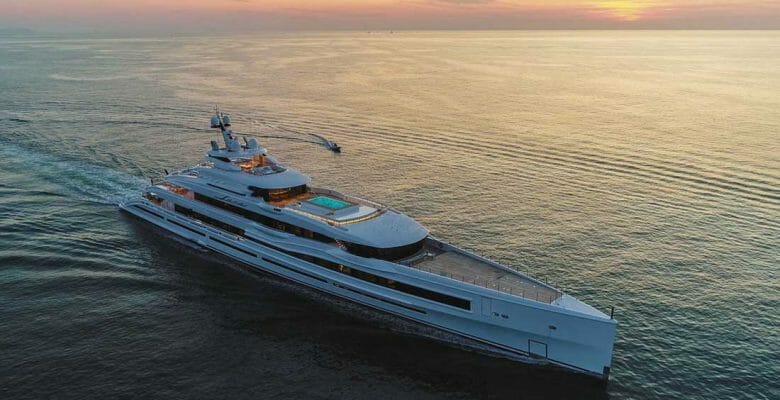 The owner of Lana is heaping praise on the design, build, and management teams for his just-delivered megayacht. “Every technical feature, every aesthetic element, every single detail was executed to perfection,” he says. While she was the first so-called gigayacht launched at Benetti, the 351-footer (107-meter) is the last of the three to depart.

Lana launched during the winter late last year, but the owner decided to add a few things in the ensuing months. For instance, two Kongsberg-outfitted wing stations were on his list. COVID-19 complicated the schedule, seeing complete shutdown of shipyard operations for several weeks. Once work could continue, challenges continued, too, since equipment suppliers could not arrive on site to conduct first-hand tests. However, Benetti’s technicians coordinated efforts with the international equipment representatives, to ensure everyone kept apprised.

To keep her name confidential during construction, Lana went by her hull number, Benetti FB277. Everything about her, not just her LOA, is ample. Ceiling heights inside, for example, are 8’9” (2.7 meters). Beam comes in at 47 feet (14.4 meters). And, her volume is 3,900 gross tons. 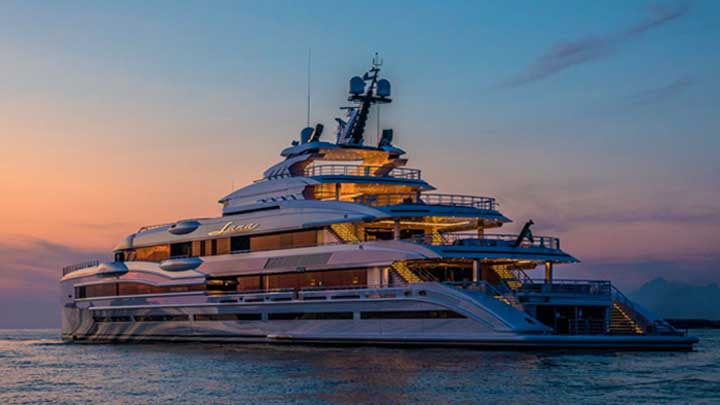 With ample deck areas, it may come as no surprise that seven guest staterooms sit on the main deck. A full-beam suite with two balconies is for the owner, on the wheelhouse deck. Crew—34 in total—have about half of the lower deck for their cabins, with the remaining cabins a further level down. For entertainment, the owner and guests can watch movies in the upper saloon, also on the wheelhouse deck. Alternately, they can enjoy music from the piano in the same room. Additionally, Lana has a large spa with hammam, gym, and massage room forward of the beach club. Finally, an equally big pool awaits on the sundeck.

Although Lana’s itinerary for the remainder of the summer keeps her in the Med, she can crisscross oceans. PierLuigi Ausonio Naval Architecture engineered her for a 5,500-nautical-mile range at 12 knots, under diesel-electric power.

Lana is chartering exclusively through Imperial Yachts, which represented the owner during the build.