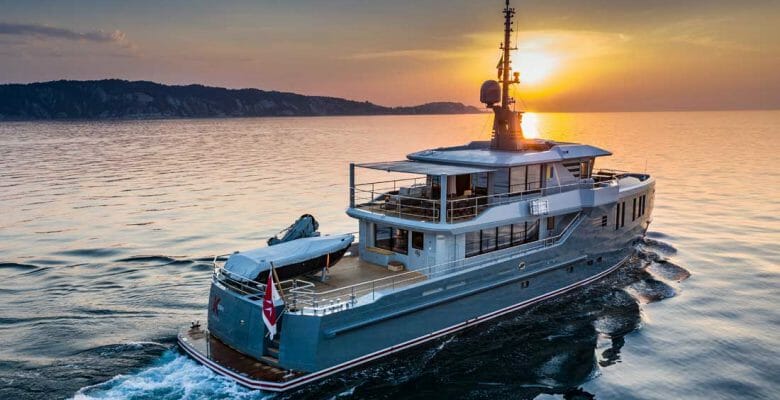 In advance of her global premiere at the Cannes Yachting Festival, we’re giving you an armchair tour of the rugged K584. Actually, simply calling her rugged isn’t appropriate. While she is an explorer, she is comfortably casual inside. In fact, her layout is so strikingly different that it’s more suitable to consider her charmingly unusual.

The 120-footer (36.6-meter) saw delivery in the summer of 2020, less than 25 months from contract signing. The owners chose the CPN shipyard in Ancona, Italy. While CPN may not be familiar to many yacht owners or their representatives, it has more than 20 years of shipbuilding and yachting experience. Hands-on individuals, the owners visited the yard multiple times during the build. Furthermore, they know not just every square inch of her decks, but also where systems and piping runs are. The consultancy firm Yachting Expertise served as their eyes and ears, too, additionally providing naval architecture.

While the Vallicelli studio styled her to resemble a rough-and-ready, almost militaristic explorer, Pierluigi Floris Architetto took care of interior design. Wood soles and just a few bold pops of color appear throughout. The most unusual aspects, however, are her bridge-deck master and main-deck layout. Normally, owners want their suites forward on the main deck. These owners, though, purposely chose aft on the bridge deck—further noteworthy because this is their first motoryacht. Additionally, the main deck includes a guest stateroom as well as the gym. Even the alfresco area on the main deck is different, dedicated to a tender and a heavy-duty davit.

While at the Cannes Yachting Festival, K584 should stand apart from other yachts that look like explorers but really aren’t. She boasts a 6,000-nautical-mile range at 10 knots with MAN engines. Sea trials revealed a nearly 20-gph (75-lph) fuel burn at 10 knots, too. “She is a beauty, strong, very efficient, and very easy to be operated,” asserts Gianluca Fenucci of Yachting Expertise. “What else do you need to be happy and enjoy yachting?”