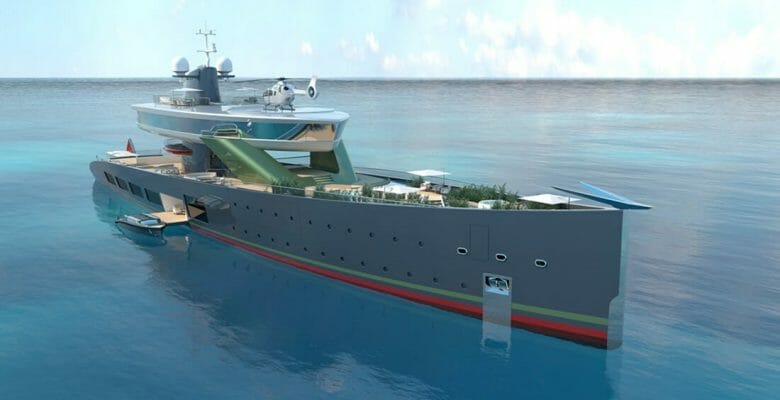 Can you imagine a megayacht without a main saloon? Lürssen can—and it’s not alone. Indeed, many owners and guests readily admit that they really don’t use the room. Additionally, they spend as much time outside as possible. So, Lürssen’s Alice concept design presents a reimagining of main-deck spaces, including about a 330-foot-long (100-meter-long) open space. Furthermore, it reimagines our relationship with nature, bringing many elements right onboard.

To the latter, one of the most significant surprises is a water feature—specifically, a pond. Plants grow around it, too. While certainly a concept, this is not in the realm of the impossible. Yachts have been launched with “living walls,” with real growing greenery. Some have had entire herb gardens onboard, too—no mere handful of tiny pots on the galley windowsill.

Along these same lines, Lürssen’s Alice concept strives to reimagine how we impact nature. The yacht relies upon hydrogen fuel cells to generate electricity. These units replace the customary diesel gensets, similar to a megayacht already in build at the yard. Waste-heat recovery, emissions-heat recovery, and mirrored ports for the owners’ suite, which reflects heat and therefore reduces air-conditioning needs, are employed, too.

The design reimagines other things as well. For instance, Lürssen’s Alice concept puts a twist on the glass-bottom pool, suspending the structure above the main deck. Additionally, rather than have a helideck double as a dance floor when the copter is off somewhere, the design dedicates an area for dancing, along with a nearby bar, naturally.

By the way, you can see Lürssen’s Alice in person. The shipyard is supplying Miniatur Wunderland (“miniature wonderland”) in Hamburg with a scale model. Miniatur Wunderland is the largest model railway museum in the world and an incredibly popular attraction. The museum is adding a few cityscapes to its displays—including one of Monaco, in which the yacht model will appear.

Fittingly, that arrangement led to the concept design gaining the name Alice. “Wunderland” reminded the shipyard team of Lewis Carroll’s famous children’s tale, and of course the title character.