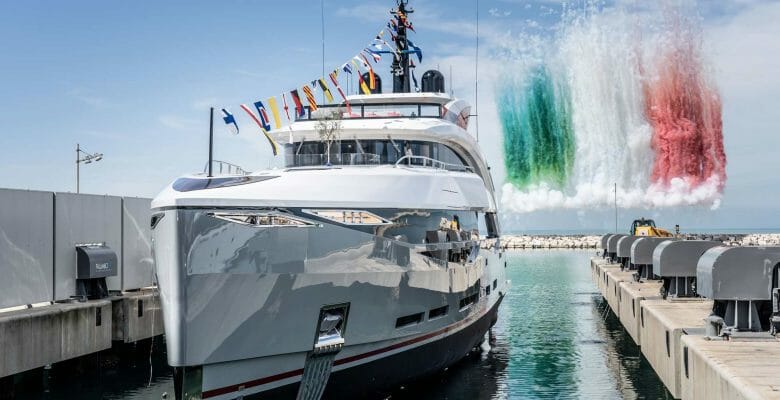 Translated from Italian, granturismo means “grand touring.” Granturismo became a popular word for automobiles in the 1950s whose design and purpose connected the worlds of sports cars and luxury cars. Furthermore, granturismo autos were for long days on the road—therefore, the “touring” aspect. A few Italian yacht builders like ISA Yachts use the word for their sporty yachts, with ISA having celebrated the launch ceremony for its latest Granturismo yacht, Aria SF, in early April.

Serenaded at the ceremony, which included her christening, Aria SF features exterior styling by Enrico Gobbi – Team for Design. The sweeping arch aft surely brings to mind sportscar looks. But, it also brings to mind the history of ISA Yachts, whose deliveries for years stood out with similar styling.

The launch ceremony included the usual fanfare, including speeches from the shipyard’s management team and attendance by craftspeople who contributed to her construction and design. The owner happened to take a pretty active personal role in a lot of the design and development decisions, too. For instance, primary colors characterize the interior, where the owner worked closely with the designer Luca Dini. The interior design further has nods to the concept of speed.

While not speedy in performance, since she has a steel hull, Aria SF nonetheless upholds the touring spirit. She should see 3,800 nautical miles when cruising at 12 knots. Top speed, meanwhile, should be 15 knots.

Yacht buyers curious to see and learn more about the series can check this delivery out in person soon enough. She makes her global premiere at the Cannes Yachting Festival in September, in fact, and shortly thereafter heads to the Monaco Yacht Show.