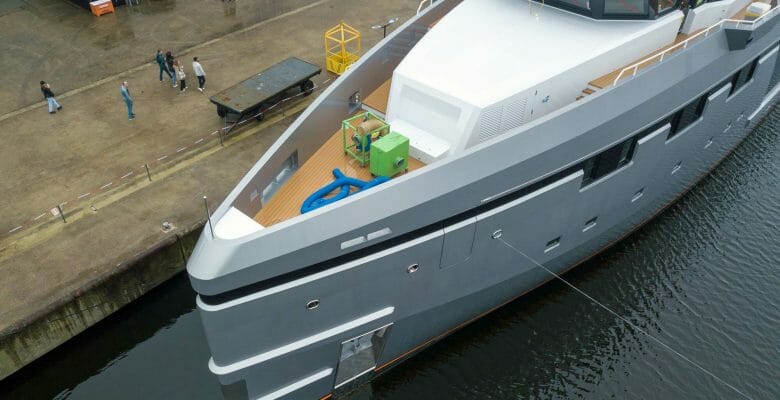 The launch was for Damen Yachting hull number YS 7512, revealed in 2019. The “75” indicates she’s part of the YS 75 series, measuring 246 feet (75 meters) overall. Notably, the series is the largest Yacht Support offering to date. The project has been at Damen Yachting’s Vlissingen facility in the Netherlands since the late summer of 2021.

Although the builder is not disclosing details about the owner, industry insiders believe this is indeed Jeff Bezos’ support yacht. If she is, she’ll accompany the Oceanco Y721 sailing superyacht. News of the two belonging to Bezos broke in a Bloomberg Businessweek article in May 2021. Specifically, the article was an excerpt from Amazon Unbound, a Bezos biography. In part, it mentions a three-masted schooner and support yacht.

The facts we do know about YS 7512 pertain to her sizable volume of 1,900 gross tons and her beam of 41 feet (12.6 meters). Additionally, according to Damen Yachting, the owner wanted a yacht-like paint job, with full fairing. Inside, meanwhile, the owner requested staterooms for guests, crew, and specialty staff, a maximum of 45 people. Plus, a heli hangar and helipad needed to be onboard, along with tenders and gear for other activities.

Generall speaking, the YS 75 series provides room for larger tenders and toys than its other Yacht Support projects do. Personal subs, big speedboats, and further heavy craft can stow amid 3,660 square feet (340 square meters) of deck space. A custom crane for launching and retrieving them can go here, too. Finally, the YS 75 series should see a top speed of 18 knots and a range of 5,000 nautical miles at 15 knots. That allows the support yacht to venture ahead of the yacht she’s accompanying to scope out anchorages, set up the toys, and more.

Jeff Bezos’ support yacht or not, YS 7512 should see delivery later this year.