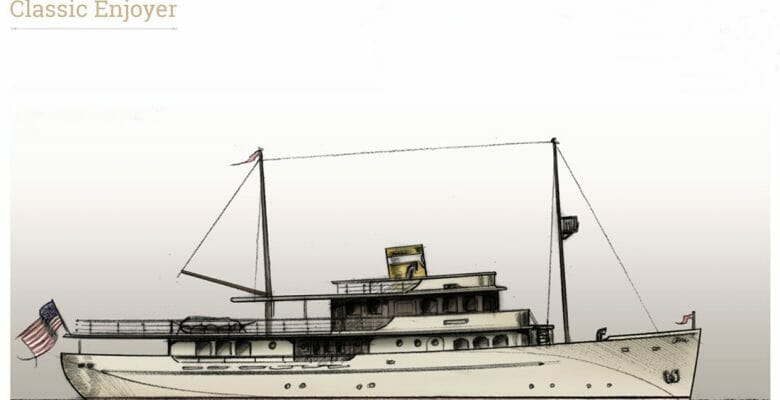 I designed a superyacht.

You read that correctly: I designed a superyacht.

I sat mesmerized while the design team at Vripack took a seeming jumble of inspirational pictures and descriptions from me and turned them into an exquisite superyacht profile and general arrangement so vivid that I felt I were actually walking the decks. All in less than 48 hours, too—as intense for Vripack as it was for me.

That superyacht is the 138-footer (42-meter) above, a classic cruiser to explore American shores and far-flung ones. “A Classic Explorer,” Albert Abma, one of Vripack’s naval architects, called her, upon hearing my cruising goal. “Not ‘explorer,’” I replied, “that reminds me of an expedition yacht. I do want to go exploring, but in the sense of enjoying the world.” Without missing a beat, he came up with “Classic Enjoyer.”

My Classic Enjoyer superyacht began with a simple invitation: come to Vripack’s studio in The Netherlands and fulfill a “bucket list” item. The design firm calls what it does “engineering fantasies.” So, what better way to understand that than to step into an owner’s shoes?

As a journalist, I’ve interviewed dozens, if not hundreds, of owners, captains, and project managers. I’ve listened as they explained what inspired them to build, how they had specific visions for the profile and interior—but always after the yacht had been delivered. It’s one thing to know the design process happens, but it’s entirely different to experience it.

And what an experience it was, seeing the Classic Enjoyer spring to virtual life. The Vripack team, directed by an appointed project manager, Jeroen Droogsma, asked question after question. How do I plan to use the yacht: privately vs.charter? What about classification? Number of guests? What about crew—how do I like to live, and what type of interaction do I want? Where do I plan to cruise (which affects draft)?

Notice how LOA wasn’t the first question. Nor the second. It did come up, of course, after all of the above. And my answer was as much of a challenge for Vripack as the 48-hour time frame was. I didn’t have a set size in mind, though it shouldn’t exceed 148 feet (45 meters), to retain a sense of intimacy aboard. Therefore, Vripack was tasked with the old design adage that form follows function: determine the LOA based on the performance parameters that dovetail with the classic style, and based on what honors the classic style itself. “It is very important for a classic yacht to find the right balance in design,” explains Droogsma. 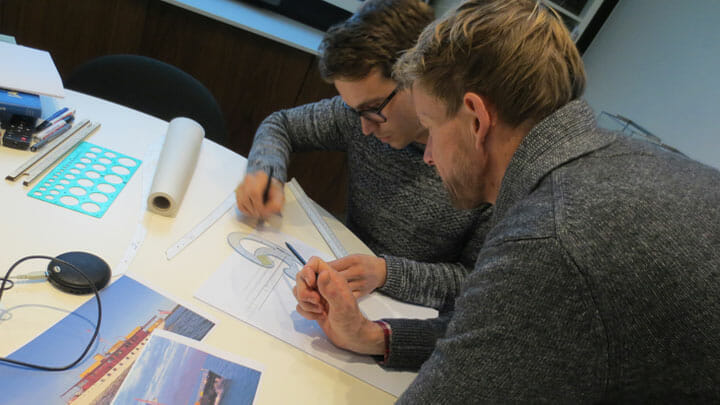 While Abma and his team set about analyzing these factors, other Vripack designers stepped up to the plate. Pim Dijksman (left, above), who opportunely shares my passion for classics, reviewed my inspirational images with me before sketching the first lines. “My personal goal for a project like this is to keep the soul of the period alive,” he says. When Bart Bouwhuis (at right), co-director of Vripack with Marnix Hoekstra, came in to see the progress, he couldn’t help but start sketching, too. Dijksman and Bouwhuis bounced ideas back and forth as the Classic Enjoyer became more detailed. A modification of the canoe stern here, the addition of a hydraulically operated crow’s nest there. “What about sliding windows in the wheelhouse?” Dijksman inquired. “Yes! Yes!” Bouwhuis replied, “with leather grips, too!” For several minutes, I forgot I was the so-called client and simply enjoyed seeing a fantasy become engineered.

Before the end of the afternoon, the Classic Enjoyer had not just her profile, but nearly a complete general arrangement and initial specifications. And by the next morning, Chiara Altomani, Vripack’s interior designer, had a spectrum of interior tones, textures, and materials that would evoke the classic look while bringing in a bit of modern flair. (The gallery below showcases some of those items.)

“The short timeframe was definitely a challenge,” Droogsma says. Consider that what Vripack accomplished in 48 hours can take a few weeks. It’s driven as much by clients needing time to think as it is by the studio analyzing all possible approaches. But, technological advances like 3D printing and virtual reality embraced by Vripack do speed up the process. “When you get the opportunity to combine these new techniques with a classic design, it reinforces each other in its contrast, and you get a great mixture between disruptive innovation and classic charm,” Droogsma adds.

So much went into the design of my superyacht that I could write page after page about it. It was a fascinating first look into the first steps of superyacht creation. And it’s inspired a new series here on MegayachtNews.com, which will debut in February. It’s called the Superyacht 101 series, and it’s for those of you who are new to yachting—or this end of yachting. Each month, we’ll go in depth into each aspect of yacht commissioning. We’ll review what to keep in mind for the design process. We’ll provide insight into the bid process with shipyards. And we’ll cover things like hiring the right crew. All of these and more are meant to better educate you, so your ownership experience is all the better.

For now, enjoy these glimpses of my 48 whirlwind hours with Vripack.