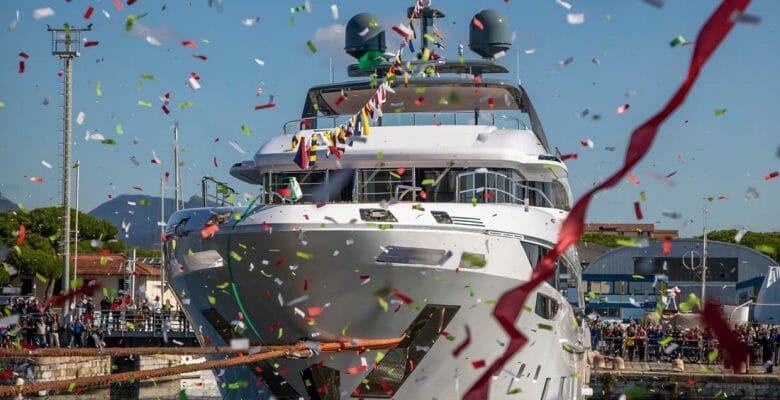 Naturally, every megayacht launch marks a historic moment for a shipyard. In the case of Benetti, the Lucky Wave launch marked the third hull in its Diamond 44M (a.k.a. Diamond 145) series. Additionally, she slid down a slipway at the Italian yard’s 148-year-old site in Viareggio.

The Diamond series is part of the Benetti Class division, with fiberglass construction and semi-custom flexibility. For perspective, the first yacht in the series, Ink, launched in January 2020. Each yacht features naval architecture by Giorgio M. Cassetta, with a variety of sound- and vibration-attenuation measures, plus engineering for long range. In fact, expect Lucky Wave to have a 5,000-nautical-mile range at 11 knots. The 1,400-MANs further should permit a 14-knot cruising speed. Additionally, every Diamond series yacht, as well as other Benettis, now come with an air-filtering and recirculation system. It filters out dust and other particles plus introduces fresh air several times each hour.

Lucky Wave, which launched before a crowd of craftspeople, local authorities, and curious onlookers, has accommodations for 10 in the owners’ party. Benetti has not revealed what woods, marbles, and other interior-décor materials are aboard. But, the shipyard does say its own interiors division collaborated with the owners.

The owners and guests aboard Lucky Wave have an enviable sundeck to enjoy. Benetti asserts that the roughly 1,100-square-foot (102-square-meter) space is the largest in this size category, too. It’s made for a mix of sunning, dining, and general relaxing underway or at anchor. Thanks to a side-launching, dedicated garage, everyone onboard also has a cozy beach club for waterside relaxing.

While Benetti prepares Lucky Wave for delivery, it also has three more Diamond megayachts in build.