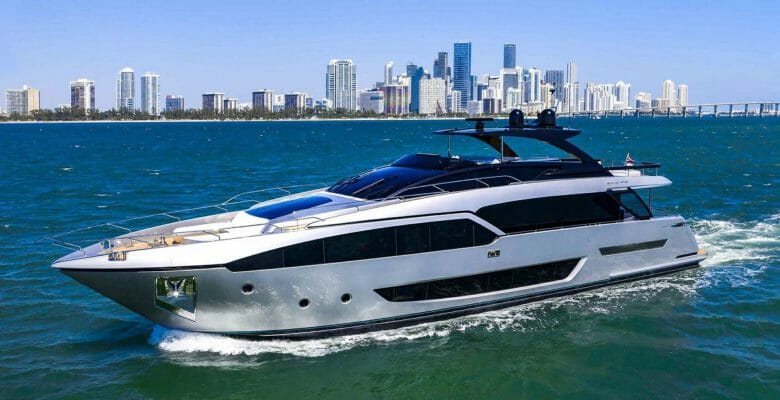 The heat of the summer is here, and yacht owners everywhere are escaping to the water. Celebrities are, too. More to the point, they’re escaping all over the Med aboard superyachts, naturally, ones belonging to friends or for charter. Here, we engage in one of our favorite pastimes, summer superyacht celeb spotting. We can tell you who’s cruising and where since most of these famous folks share their journeys with their social media followers.

Just before Christmas last year, the soccer star and pop star acquired a Riva 90 Argo (above). They christened her Seven and cruised around Florida over the holidays with their family. This summer, the Beckhams are enjoying Italy’s Amalfi Coast onboard their megayacht. Notably, “seven” represents the number David Beckham wore while a player. It’s the middle name of their daughter Harper, too. (UPDATE, JULY 28: The Beckhams and their family have been cruising aboard the charter yacht Madsummer this week, too. The 312-footer/95-meter previously had NFL superstar Tom Brady aboard this season.)

The matriarch of the Kardashian clan and her boyfriend, Corey Gamble, are currently in the South of France aboard Flag. Kris Jenner has been posting photos of herself on deck in the Med this week (above). She cruised aboard in Capri and among the Greek islands in 2017 and 2018 as well. The 204-foot (62.3-meter) superyacht is ideal for annual summer superyacht celeb spotting, since she belongs to fashion designer Tommy Hilfiger. Previously, yacht guests have included model Bella Hadid and model (further Kris Jenner’s daughter) Kendal Jenner.

Summer superyacht celeb spotting isn’t complete without NBA great Magic Johnson and his wife Cookie. The couple perennially charters, indulging for the past several years. Typically, they do so with LL Cool J, Samuel L. Jackson, and their wives. Last year, they cruised in Italy. This year—just this month, in fact—the group explored Greece aboard the 279-foot (85-meter) Solandge. They indulged in a musical theme night on deck, as you can see from Johnson’s social media post below. Johnson additionally shared videos and photos of them enjoying the PWCs, having a beach barbecue, and watching fireworks courtesy of Solandge’s captain and crew.

We are having a blast in Greece! We all got festive for our soul train line tonight and busted a move or two 😂 pic.twitter.com/o0taf6ZTWM

The rocket-ship and electric-car CEO famously stated this past spring that he doesn’t take vacations, or own a yacht. Clearly he’s changed his mind about breaking from work, though. He joined friends in Mykonos this week aboard Zeus. Those friends include the CEO of the talent agency William Morris Endeavor, Ari Emanuel. The 244-footer (74.5-meter) is best known as the unconventional-looking Eco, her launch name in 1991, and as Katana, under Oracle founder Larry Ellison’s ownership from 1999 to 2007.

IJE, the biggest of three “gigayachts” from Benetti, belongs to Aussie businessman James Packer. He’s recently been aboard his 354-footer (108-meter) with model Josefine Hanning Jensen. Jensen’s 1.2 million Instagram followers have seen dozens of photos and videos this month in the Med. From ginger-tea-fueled mornings to dressed-to-the-nines evenings on deck, the pair ventured to St Jean Cap Ferrat and St. Tropez, among other South of France spots.