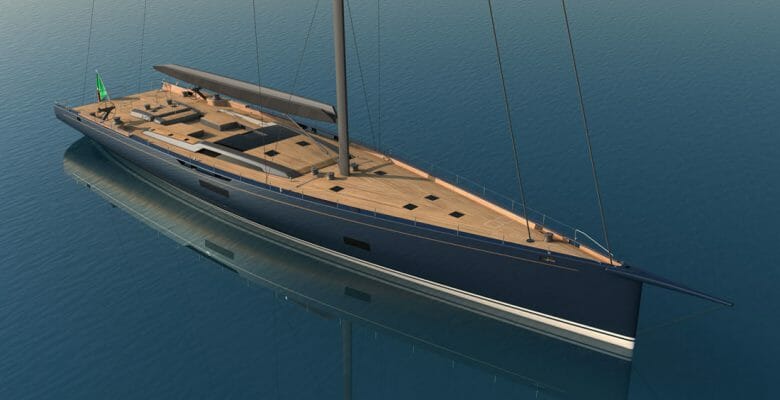 A repeat client of the Nauta Yachts design studio will take delivery next summer of an unusually fast sailing superyacht. Being built by Baltic Yachts, she’s known for now as a Baltic 130 Custom. As for her unusual speeds, expect 26 to 28 knots when planing.

Nauta Yachts, which is responsible for styling and interior design, says the client wanted superb speed for races. He’s a passionate regatta sailor, but he also wanted high comfort and good elbow room for cruising days. In fact, performance and creature comforts needed to exceed those of his previous yacht. Of course, sound and vibration attenuation were also key. Baltic Yachts got the nod to build the 130 Custom due to its reputation for high-performance sailing yachts. Nauta Yachts has collaborated with the shipyard three previous times, too.

Yet another partner in the Baltic 130 Custom, being constructed of carbon composite with Nomex coring, is a previous collaborator: Reichel Pugh Yacht Design. It’s providing naval architecture and the sail plan. Its velocity prediction program came up with the above-mentioned speeds. The Baltic 130 Custom should see an equally noteworthy displacement speed of 16½ knots. As for the sail plan, try these numbers on for size: a mainsail of nearly 5,705 square feet; a genoa of 4,090 square feet; and a gennaker of 13,993 square feet.

Adding to the performance aspects, the Baltic 130 Custom has a lifting keel. Draft will vary from just shy of 15 feet to 23 feet. When the racing action is hot, the crew can brace their feet during heeling against the one-foot-high—and equally wide—gunwales. On cruising days, guests aboard the yacht can sit on the gunwales.

If you take a close look at the profile rendering, you’ll see the gunwales are lower alongside the house. This is to allow sunlight to enter the nearly 28-foot beam interior, and to serve as freeing ports in an emergency.

As mentioned above, the Baltic 130 Custom will cater to days off the race course. The guest cockpit will host dinners, drinks, and even sunbathing. The owner can slip away for a good night’s sleep to the forward master suite, complete with a study. Five guest staterooms will additionally be aboard.