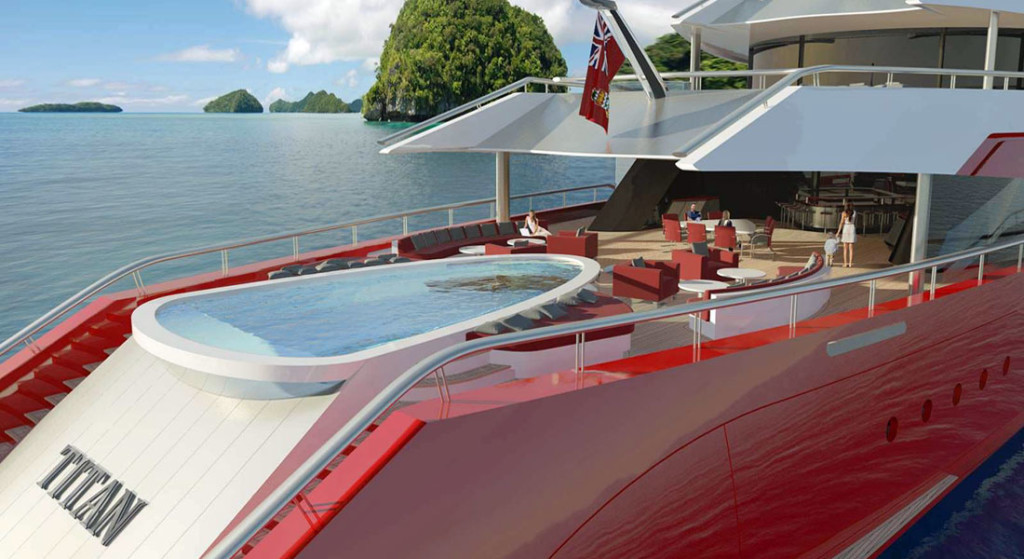 BMT Nigel Gee and Oceanco have collaborated on a number of delivered megayachts and proposals. Titan may be the latter, but she could very well become the former. The only thing missing is the interior as imagined by you and your designer of choice.

Measuring 384 feet (117 meters) and with a healthy beam of 50’2” (15.3 meters), Titan is aptly named. (She’s also known by a design project name, Oceanco DP055.) A big, bold superyacht such as this deserves an equally bold hull color—at least in the opinion of the design and build teams. And we don’t disagree. The dare-to-go-there red hull and superstructure accents are highlighted by titanium, too.

Projects like Titan are meant to be away from land for weeks at a time. Oceanco and BMT Nigel Gee have specified 87,177 gallons (330,000 liters) of fuel and a hybrid propulsion system. Incorporating twin MTUs, the package should permit super-quiet superyacht operations and better fuel consumption than traditional diesel propulsion. Top speed should be about 18 knots.

Though as stated earlier, the interior of Titan is open to owner choice, a party of 14 can be accommodated handily. Consider placing the master suite on the upper deck, to create an aerie-like apartment. You’ll get a private hot tub and alfresco area aft, too. Overall usable interior space totals a massive 11,582 square feet (1,076 square meters), spread over six decks. That includes the beach club you’ll surely want. Oceanco and BMT Nigel Gee suggest arranging Titan to include an adjacent wellness area with a gym, massage room, and sauna.

Another suggestion: a central, significant-size lounge on the main deck, with a formal dining room. Titan has full-height windows here to maximize your enjoyment of the shoreline while you’re at anchor. (With her LOA and a draft of 12’1”, or 3.7 meters, Titan has some limitations in terms of marinas.) The glass panes are additionally angled to avoid reflections coming from the inside of the yacht.

No matter your choice of amenities, Titan will be taken care of by a crew of 30. Whet your appetite for imagination with this video. Especially take note of the glass-bottomed infinity pool. It creates a lovely effect in the beach club when light spills down through it.