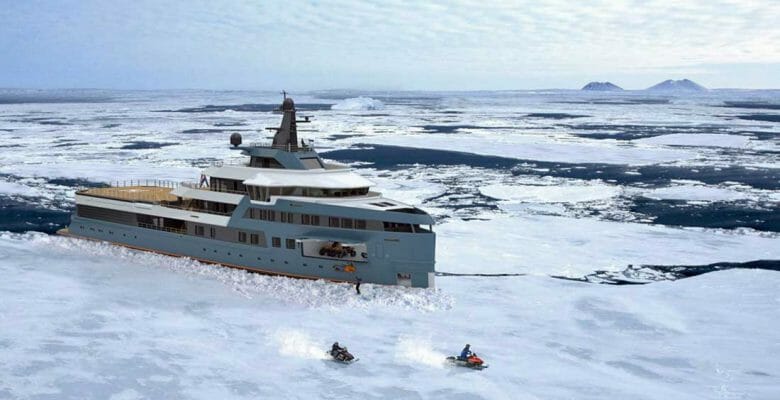 In the competition to capture adventure cruisers’ attention, the Damen SeaXplorer succeeds. Considered a crossover by the builder, combining superyacht luxury with an all-conditions commercial ship, the relatively new range has garnered a few contracts so far. One, the SeaXplorer 75, saw her keel laying last July. In a newly posted video, Amels, which is marketing the range, provides a taste of what’s to come.

The 252-foot (76.9-meter) megayacht encompasses six decks and a substantial volume of 2,650 gross tons. On the luxury side, accommodations for 12 include two VIP suites as well as a more expansive owners’ suite. Given the 46-foot (14-meter) beam, there’s plenty for the owners to tailor to personal tastes, from lounges to a spa and more. But, since the SeaXplorer 75 is, after all, an explorer, Damen and its design partners want guests to relish the ever-changing environment outside the windows. That’s why a covered observation area is right up front, literally at the bow.

Announced in 2017, the first SeaXplorer 75 will explore the oceans in 2020. As for those explorations, between fuel and stores for provisions, she’ll be able to remain self-reliant for 40 days. This type of shore-stop independence is particularly crucial for trips to the poles. The SeaXplorer 75, like the rest of the range, employs a hull compliant with the IMO Polar Code. The regulation is as much for vessel and passenger safety as it is for fragile environmental protection.

Further to ensure proper explorations occur, Damen has sought input from EYOS Expeditions. The adventure-travel specialist has conducted hundreds of trips to polar regions and remote tropical ones. It provided advice ranging from the hull design to the bridge layout, as well as the davits and tender boarding. You’ll find a combination boarding area and mud room at the waterline aboard the SeaXplorer 75. As for the tenders, the ultimate choice is up to each owner. But, the megayacht can tote two helicopters, a dive tender as well as a luxury tender, a sub, snowmobiles, kayaks, and more.

See the details in the video. In the meantime, in related news, a SeaXplorer 65 is also under construction for a customer. Delivery should occur next year, too. Build slots are available for the SeaXplorer 55, 95, and 100.