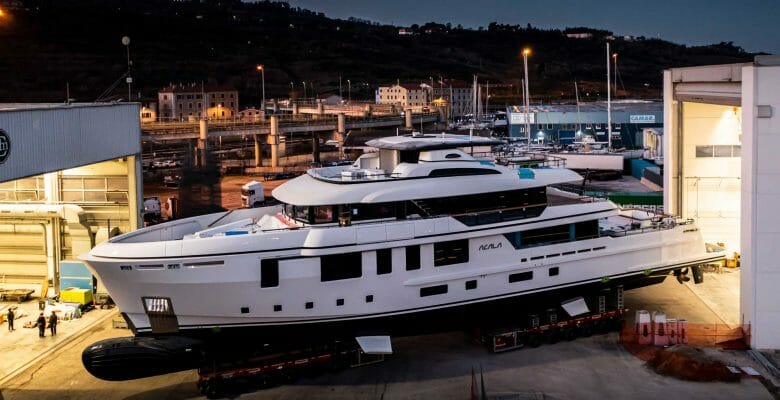 Ambitious cruising plans are in the cards for the owners of Acala, just launched at Cantiere delle Marche. Having already put thousands of nautical miles under their feet, they intend to visit ports along the Atlantic and Pacific. Furthermore, they intend to visit some of the world’s best diving sites.

This 141’3” (43.1-meter) megayacht belongs to a repeat customer and his family. They excitedly watched their new yacht lower into the water at the shipyard this week. The new Acala replaces their prior yacht, a Darwin 102 model, which also bore the name Acala. Also noteworthy, the husband had owned yachts from shipyards like Blohm+Voss, Feadship, and Lürssen before that.

Because of their abundant experience, Cantiere delle Marche says they put a lot of time and effort into the technical specifications. In fact, the shipyard says Acala has the most comprehensive, detailed spec among any of its yacht, taking nearly a year to finalize.

With a 28’2” (8.6-meter) beam, Acala features naval architecture by Cantiere delle Marche’s longtime collaborator, Hydro Tec. She additionally features styling by Horacio Bozzo Design, a first-time partnership for the yard. Bozzo says he and his team “brainstormed a lot” with the owners to address the family’s wishes.

Similarly, Mexican designer Simon Hamui worked closely with the owners to create a simultaneously laid-back and luxurious interior. While images are not yet available, the shipyard says the ambience is equally suited to dining in shorts and T shirts as it is more formal attire. This look flows from the cozy main saloon to the skylounge, where the dining area is. Furthermore, the approach characterizes the staterooms, six suites for 12 people. Notably, three sizable VIP staterooms join the master forward of the main saloon. Two twin staterooms are below decks, where the five crew cabins are well-appointed, too. This was a particular request of the owners, who further wanted the captain’s cabin, aft of the wheelhouse, to look nice.

Alfresco amenities aboard Acala include an aft-deck pool, and a partially shaded sundeck that should be the center of activity most days. It, too, has a pool, along with a bar, a dining area, and of course sunning space. Cantiere delle Marche pledges to release more information about the design in the coming months.

In the meantime, sea trials should confirm a max speed of 14 knots with Caterpillar power. Her range should exceed 5,000 nautical miles at 10 knots as well.