You are here: Home / Charter & Cruising / Where the Megayachts Are for Christmas

The holiday season typically sees a plethora of pleasureboats head south for the warm weather and water. This year is no different, with lots at anchor and at the docks from Florida to the Caribbean. Here’s where nine of the world’s most well-known megayachts are for Christmas. All location information coming from public AIS data.

Apogee. Currently sitting in St. Thomas, Apogee has been in the same owner’s hands since delivery in 2003. He’s Darwin Deason, an American tech entrepreneur who spends several months a year onboard. Interestingly, the 205-footer (63-meter) has a lounge replicating the decor of the Hôtel de Paris in Monte Carlo.

Arctic P.  This converted icebreaking tug is also in St. Thomas. LOA: 287 (87.6 meters). Long connected to Australian media mogul James Packer, the rugged global cruiser is quite different than his most recent acquisition, the even larger IJE, delivered last year.

Athos. When it comes to where megayachts are for Christmas, Antigua is a hotspot. Athos (above) is one of many sailing superyachts there, in fact. The 203-footer (62-meter) has had a busy year, too, visiting Scotland and Norway over the summer. Definitely check out the fantastic photo gallery on her website.

Bravo Eugenia. Jerry and Gene (a.k.a. Eugenia) Jones of Dallas Cowboys fame have their yacht in Miami for the holidays. Bravo Eugenia departed for the city from San Diego right after Thanksgiving. More notably, though, the 358-footer (109-meter) served as Jerry Jones’ war room for the NFL draft in April. This gave TV viewers a look at one of her lounges when he appeared on camera.

DreAMBoat. Arthur Blank, owner of the Atlanta Falcons football team and the Atlanta United FC soccer team, has his family-friendly 295-footer (90-meter) in Antigua. Surely, his grandkids love the nearly 20-foot-long (6-meter-long) aft-deck pool. Regardless, Falcons fans love the fact that the team logo is onboard. DreAMBoat spent a few days in Boston this summer, before heading to The Netherlands.

Fountainhead. A frequent visitor to Miami, Fountainhead arrived in that city in November from Savannah, Georgia. She measures 288 feet (88 meters) and is immediately recognizable for a basketball hoop on her aft deck. That, therefore, has led many to believe Dallas Mavericks owner Mark Cuban is her owner. But he’s not. 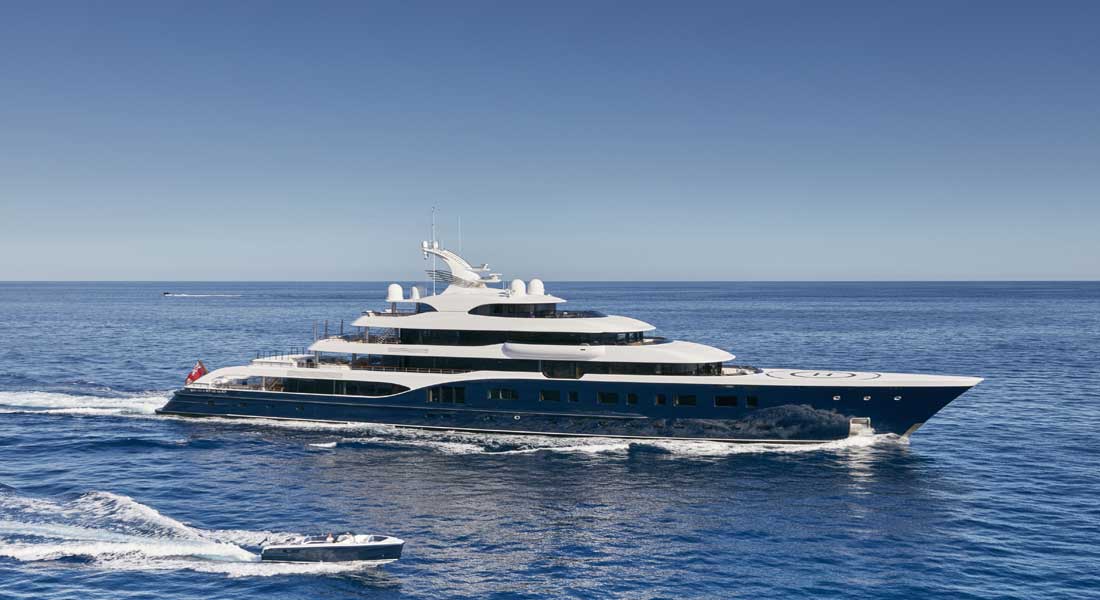 Kaos. Kaos is the new name for the 361-foot (110-meter) Jubilee. She underwent a 17-month refit at Lürssen, wrapping it up just in time for the holidays. In fact, she departed Europe and headed for St. Maarten, another hotspot when it comes to where megayachts are in the Caribbean.

Kismet. Jerry and Gene Jones aren’t the only NFL team owners with yachts in Miami. Shad Khan, owner of the Jacksonville Jaguars, had Kismet (at top) head south to Miami from Jacksonville in October. Notably, the 308-footer (94-meter) is a frequent sight in both cities.

Symphony. Three-hundred thirty-three feet (101.5 meters) long, Symphony (above) was in Europe into early October. St. Maarten’s waters are hosting her for the holidays. Fun fact: She was the first Feadship to exceed the 100-meter (328-foot) threshold.